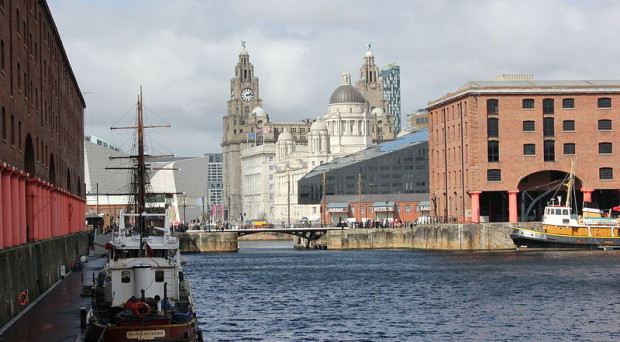 Last month Liverpool hosted the British Society for Parasitology’s (BSP) 53rd annual spring meeting. Having enjoyed and previously reviewed several of the BSPs meetings in Bugbitten, this year I decided to volunteer as a helper at the meeting and also help organise the infamous Young Parasitologists’ Party (YPP). So here’s what happened- from a slightly different perspective this time…

The day before the conference kicks off I’m excused from my duties, as I’m also reviewing the Liverpool School of Tropical Medicine’s (LSTM) NTD meeting. Back at headquarters (LSTM) the rest of the volunteers are manically packing goody bags with leaflets and USBs, onto which we’ve lovingly uploaded copies of abstract booklets, maps and agendas, one by one.

6:00am rise- I’ve stayed with a friend to be nearer to the venue for the early start. Sporting our attractive, maroon BSP polo shirts, we head to the Liverpool docks.

7:30am- We arrive at the venue, the BT convention centre, it’s huge and shiny. Before the excitement kicks in, we realise we’ve both forgotten our posters.

8:00am- We arrive at the BT convention centre, with posters. We take a look around to familiarise ourselves with the layout. Several of the rooms have curved walls and seating areas that rotate 180° like something out of Dr Who. The morning consists of packing yet more leaflets into said goody bags, manning the registration desk and pointing attendees in very vague directions. I sneak away to take notes on the plenary sessions.

At the plenary session we are first updated on the emergence and spread of artemisinin resistance by Professor Dominic Kwaitkowski (Oxford University and the Wellcome Trust Sanger Intitute). Currently there is a “soft selective sweep”- that is, a reduction in variation as a result of positive selection. One of the major contributors to this is the Kelch13 mutation that confers artemisinin resistance (recently reviewed by Hilary Hurd). Professor Jurg Utzinger (Swiss Tropical and Public Health Institute) followed with a plea for better diagnostics that are geared towards post-elimination settings e.g where very low-level parasitaemia could cause a drop in sensitivity of these tools. Finally, Professor Janet Hemingway emphasised the need for better quality control of bednets and IRS operations. Fake nets and inconsistencies in IRS can set back control programmes, wasting time and resources, as well as encouraging insecticide resistance.

12:30pm– By this time we are famished. One enterprising volunteer smuggling extra lunch packs barely makes it back to reception before a maroon swarm of helpers descends upon them. The reception is slow over lunch.

Out of the five different themed sessions I choose to attend the diagnostics stream, where I am most excited to learn about a new quantitative assay for the detection of schistosomiasis. The Up-Converting Phosphor- Lateral Flow (UCP-LF) assay is simple, low cost and the reagents are dry and stable at ambient temperatures- ideal for endemic countries. The format also allows multiplexing of different antigens, which could be useful for detecting multiple Soil Transmitted Helminths (STH) in one go.

I also learn more about a diagnostic tool that I will soon be working on as part of my PhD- the Genedrive® . The handheld Point of Care (POC) device, analyses nucleic acids from fresh or stored samples or biospecimens to provide near-patient diagnostics. Dr Tom Edwards (LSTM) presented his research on the optimisation of preparing sputum samples for TB diagnosis for the Genedrive platform.

5:30pm- I head off to set up the Young Parasitologists’ Party (YPP) with a couple of the others, sadly missing the poster session that we’ve each submitted a poster for. Featured below next to her poster is PhD student and fellow volunteer Eva Caamaño Gutierrez, she describes her experience-

“It was great to be part of the organisation, it allowed us to see first handed how an event of this size is run and how to deal with problems that might arise. It was not only a positive experience professionally, but also very fulfilling personally as it allowed us to get to know many people and to make new friends. Given the opportunity, I will definitely do it again and I will most certainly encourage other people to do it, great fun!”.

9:00pm- The extensive buffet for 120 people is gone. Every last pizza in the establishment has been demolished. We take that as a good sign. With people excited about the promise of a pub quiz, for some time we consider making Sarah shout questions out over the speakers (now blasting 90’s music) since we aren’t allowed to turn them off. In the end we the restaurant manager prints copies of the the quiz out, which we hand out along with left over drinks tokens. This goes down particularly well- crisis averted.

8:00am- Bright eyed and bushy tailed, a handful of dedicated volunteers make it in for the early start and hold down the fort while the rest figure out where they’ve woken up…

12:30pm- Again lunch packs are hoarded en masse and distributed amongst the slightly less bright-eyed volunteers who have now made it in.

One of my favourite talks of the conference was LSTM PhD student Lucas Cunningham, on the development of a LAMP assay for the detection of Trypanosoma DNA in Tsetse flies. The assay has impressive sensitivity with a lower detection level of the equivalent of 0.25% of a single parasite. I’m probably very biased, because I did my MSc with Lucas, but he did win 3rd prize for best student talk at the conference- so clearly a lot of people agreed. Lucas talks about his experience giving his first BSP presentation- “I felt both apprehensive and excited to give my talk at the BSP, a lot of work had gone into the project and I really wanted to ensure I gave all those involved their dues by giving a good presentation. I was of course pleasantly surprised to have won an award and grateful for the opportunity to present at BSP Liverpool 2015. I feel that the subject of a new xenomonitoring tool for sleeping sickness is an important one when trying to realise the aim of eradicating the disease by 2020, and I think this was reflected in the award that the talk received.

5:30pm- The view from the top of the Maritime Museum where the conference dinner is being held is spectacular. Sat at a table with the rest of the volunteers, the past two days have felt like at least a week so there is little small talk. Instead we have multiple fits of unstoppable giggling and perpetual moaning about the lack of a second bread roll, interrupted by liberal use of the salt shaker. The evening ends with an energetic ceilidh, as per BSP tradition.

9:00am- The conference closes with the presentation of the Wright Medal to Professor Julian Rayner (Wellcome Trust Sanger Institute). Through genome sequencing and proteomics his work has massively contributed to our knowledge of Plasmodium-erythrocyte interactions, which will be useful for vaccine development.

11:30am- After the conference, the venue is opened up to the public for a free “Question time” style debate entitled “Conflict, environment & Ebola: Barriers to parasite control and elimination”. So- now with my fiancé in tow- we take our seats and grin as we recognize the chair- Peter Sissons off the BBC news. Alongside Peter are Professor Janet Hemingway, Prof. Moses Bockerie (LSTM), Julie Jacobson (Gates foundation), Director of the BSP Prof. Judith Smith (Salford University), Louis- Albert Tcheum Tcheuenté (Univesity of Yaounde, Cameroon) and Anthony  Bettee (Ministry of Health, Liberia). There is a lot of discussion about the mistakes made, the consequences and knock-on effects of the ebola outbreak. The overriding message is that a multifaceted collaboration between policy makers, public health workers and scientist is essential to strengthening the health systems so that future disease outbreaks can be controlled more efficiently. The debate at the end comes across as more of a discussion, possibly due to the audience of like-minded scientists. This highlights the need for a greater involvement of the general public in these events, so that they too can express their concerns and learn from the experts.

12:30pm- Freedom. It’s been exhausting, exciting, inspiring and FUN. I really have to commend the BSP council members who organised the smooth running of this massive event. I especially would like to thank secretariat Julian Fuller (pictured below, top right), who was posted at reception the entire time, endlessly attending to delegates always with a smile on his face. Here’s to 60-ish hrs with these guys!