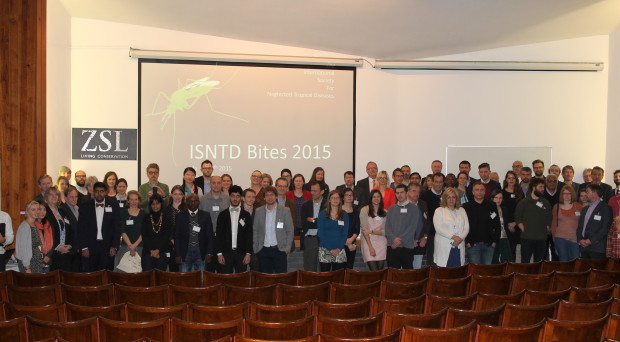 Participants at the ISNTD Bites meeting, 2015

What are neglected tropical diseases (NTDs)? Mathew Baylis gives his definition at the annual ISNTD Bites meeting held in London this month.

“I see it as meaning a disease that is understudied relative to its impact”.

Many of these diseases are vector transmitted or are zoonoses (diseases that can be transmitted from animals to humans) and emergent frontiers of some of them were explored during the meeting; chaired by International Society for Neglected Tropical Diseases Director, Marianne Comparet.

The first session opened with an account by David Molyneux of the final challenges facing the Guinea Worm Eradication programme. He outlined its amazing success; a reduction in cases world- wide from 3 million in the 1980s to 126 today. However, complete elimination of the parasite from the remaining four countries still endemic for dracunculiasis, what Prof. Molyneux called “the last mile”, could prove to be more difficult than expected.

Progress is hampered by problems of access to remote areas of unrest and the perplexing disease epidemiology in Chad, where the parasite’s life cycle appears to have evolved to include dogs as paratenic host (see a previous BugBitten blog) and may be an example of the response of parasites to our attempts to cause their extinction. He also stressed that, at this stage of the eradication programme, endgame strategies must include maintenance of surveillance, rapid follow up of rumours of infection and a reward system for valid reports.

The selection pressures imposed on a parasite by mass drug administration and environmental changes may also be responsible for the appearance of novel hybrid schistosomes in hot spots for schistosomiasis. Joanne Webster reported the discovery of hybrids between the human species Schistosoma haematobium (the causative agent of urinary schistosomiasis) and animal intestinal schistosome species in children in Niger and Senegal. The worrying scenario of the emergence of urinary schistosomiasis as a zoonosis was all too clear.

The theme of zoonoses was continued across several of the presentations. Raffaele Mattioli emphasised the economic and health impact of tsetse-transmitted trypanosomes in Africa and profiled the Programme Against African trypanosomosis (PAAT), which provides web-based resources, including atlases for human and animal trypanosomosis.

By overlaying maps of the cattle, human and vector distribution in SE Uganda, Nicola Wardrop showed that the occurrence of all these transmission components of trypanosomosis does not match the presence of human disease cases.

She suggested this may be due to the mobility of humans and cattle and inadequate surveys of Tsetse distribution. Finally Dr. Kounbobr Roch Dabiré confirmed the involvement of a canine reservoir in the recent epidemic of cutaneous leishmaniasis in Burkina Fasco and Dr. Amanda Read, manager of the ZELS programme at BBSRC, outlined their aim to reduce the impact of zoonoses on people and their livestock.

Many neglected tropical diseases are spread by vector insects and Matthew Baylis explained that Japananese encephalitis spanned the two major themes of the meeting as it is both a zoonosis and a vector born disease.

This mosquito borne disease is caused by an arbovirus that uses pigs and water fowl as reservoir hosts and is the most important viral encephalitis in Asia. He identified rice paddy fields as important environments for transmission and reported that the disease was spreading to higher altitudes in Nepal, possibly as a result of climate change though other factors such as rapid economic development may be involved. Matthew and colleagues have visualised his definition of a NTD (see figure below) by comparing the DALYS of many human diseases (measuring their impact) with the diseases’ H indices (measuring the level of scientific interest). The diseases that fall well below the line of best-fit are under-researched and thus neglected.

One such disease, dengue fever, was the topic of several presentations. Ana Clara Silva described how education campaigns played a large part in the control of an outbreak in Madeira in 2012 while another expansion of the disease, occurring, in the Cape Verde Archipelago in 2009, was described by Patricia Salgueiro.

Her study of the population genetics of the vector mosquito, Aedes aegypti, showed that the Cape Verde halotypes belonged to a basal clade associated with West African mosquito populations. There were no new founder events associated with the 2009 outbreak.

Kun (Maggie) Hu stressed the importance of modelling the vector population, as well as antibody-dependent enhancement associated with the presence of four different virus serotypes, before producing an epidemiological model. The audience was directed to The Spatiotemporal Epidemiological Modeler (STEM) tool that can be used as a framework for predictive modelling. The importance of collecting quality field work date for modelling the spatial distribution of disease vectors was emphasised by Guy Hendrickx who proposed that prospective modellers should spend at least two of their early career years devoted to field work.

The increasing recognition that a better understanding of vector response to odours is essential if repellents and baited traps are to be an important weapon in our armoury against disease vectors was reflected in a whole session devoted to this topic. Spyros Zographos outlined his rational approach to the development of mosquito repellents that entails both screening known compounds for their ability to bind to odour binding proteins and their activity in behavioural assays.

James Logan, on the other hand, focused on odours that attract mosquitoes; odour profiles changing dependent upon the stage of malaria infection, the strain of parasite and the number of infectious bites. In addition, mosquitoes are significantly more attractive to human odour when the infective sporozoites stage is present, suggesting that both parasite-induced changes in human odour production and infected-mosquitoes’ response to odour could enhance transmission of the parasite by causing more bites to occur.

To find attractants for the blackflies that transmit the parasite causing onchocerciasis (River Blindness), Ryan Young describes an approach based on the identification of odours collected from arm pit and groin sweat and incubated to allow microbes too grow in it.  Interestingly, field studies using traps baited with beads of sweat and carbon dioxide (produced from fermentation of sugar by yeast) collected more blackflies than human landing catches.

A novel trap that runs on energy from solar panels was profiled by Jeksle de Boer on behalf of Willem Takken’s group at Wageningen University. Field tests have demonstrated that this trap, baited with a blend of carbon dioxide, ammonia and several volatiles competes well with human odour and can be used to catch mosquitoes outdoors.

Technology was the final focus of the meeting. The need for new insecticides that are long-lasting, fast working and can be brought to market quickly was emphasised by Nick Hamond from IVCC and the industry’s perspective on insecticide developments, including the use of combinations of compounds with different modes of action was put by Justine McBeath from Bayer Vector Control.

The roll out of the Oxitec programme releasing genetically modified sterile male Aedes aegypti mosquitoes (see our recent blog) in the Caribbean was described by Hayden Parry, and Jeremy Bouyer (CIRAD) outlined the combination of irradiation and insecticide treatment to produce sterile male tsetse flies that will deliver insecticide to females and will soon be released from drones. A lively debate concerning the public’s perception and acceptance of these new technologies ensued, during the panel discussion with participants advocating local engagement and complete transparency.

Sadly there is little room to do justice to the all the work presented at this ISNTD meeting, but I think it is becoming clear that recent efforts by the community are ensuring that the diseases discussed are emerging from under the radar of researchers, funders and industry and are, perhaps, becoming not so neglected.