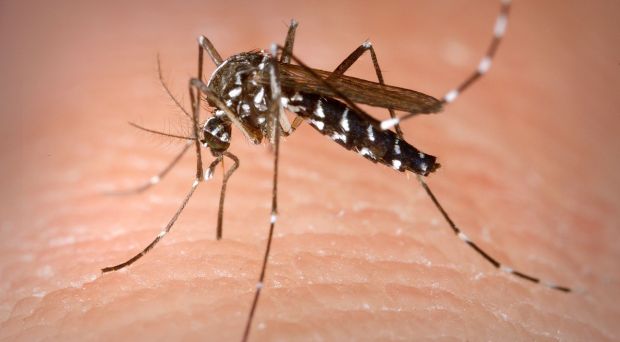 Given that mosquitoes are the vectors of some of the world’s most deadly parasites, it should be unsurprising that they are also the targets of disease control efforts. And in the case of some diseases, such as dengue, and chikungunya, vector control remains the only way to control the parasite – as approved vaccines, therapeutics or prophylaxis do not yet exist.

A popular vector control measure is the use of insecticides in aquatic mosquito breeding sites to reduce mosquito progeny numbers. These insecticides – or specifically larvicides – are sprayed on breeding sites either manually or from vehicles. However, this method can be costly and is limited in its effectiveness because many breeding sites are sheltered, hidden or very small, so therefore difficult to access. Consequently, auto-dissemination methods have become an attractive option to access these ‘cryptic’ breeding sites.

Auto-dissemination methods employ artificial resting sites or dissemination stations that have been treated with a persistent juvenile hormone analogue (JHA), which is lethal to immature mosquitoes. Upon entering the dissemination station, the adult mosquito becomes contaminated with the JHA, and when it enters a breeding site it will contaminate the breeding site killing the immature mosquitoes within. The most commonly used JHA is pyriproxyfen (PPF), which is not lethal or repellant to adult mosquitoes, requires relatively small quantities to be effectual and there is little resistance to the chemical amongst mosquitoes.

In their study, Mains and colleagues dusted male mosquitoes with PPF and then released them into test populations in field trials conducted in Kentucky, USA. The male mosquitoes used in their ADAM method did not live significantly shorter lives than untreated mosquitoes. The treated mosquitoes were able to compete with untreated males and pass the PPF to females during mating and indirectly through contact with the same surfaces. Furthermore, males travelled directly to breeding sites and spread the larvicide in the absence of females.

Most importantly, however, is that the ADAM control method showed that PPF was delivered to breeding sites at concentrations that were adequate to reduce or eliminate immature mosquitoes.

The ADAM method overcomes the limitation of using auto-dissemination stations in areas where mosquito population densities are low, and Mains et al., also show that releasing treated male mosquitoes before the indigenous population emerges can ensure that potential breeding sites are intoxicated beforehand.

The ADAM method has some limitations too, and Mains and his colleagues state that the use of this method to reduce one mosquito species can impact on other mosquito species, as different mosquitoes types often share breeding sites. Further investigation and adaptations of the ADAM method do clearly need to be carried out before ADAM can be adopted as a control tool. However, the ADAM method has the potential to become an important tool in reducing the burden of many parasitological diseases, as it can be used for the control of more than one mosquito species. The ADAM method, in my opinion, is one that agencies concerned with disease eradication should invest time and resources in developing.