The availability of good diagnostics is central to both the treatment and control of infectious diseases. Since parasitic and vector-borne diseases have the highest burden in low-income developing countries, the design of diagnostics for such diseases is complicated. In such a setting the ideal diagnostic must have “ASSURED” characteristics- that is it must be:

Here we present our top three favourite futuristic diagnostic tools over the last year. They may not necessarily fulfil every aspect of the ASSURED criteria, but we feel they deserve recognition for the innovation and creativity involved. 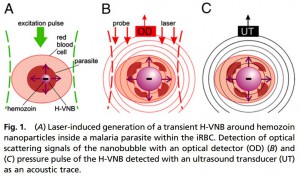 Despite technological advances, microscopy is still the gold standard for the diagnosis of many parasitic diseases. The detection of ova, cysts and parasites by microscopy is laborious, time-consuming and requires expert microscopy technicians. Further to that, microscopes are expensive and unwieldy, and it is often difficult to acquire replacement parts in the field. The search is on for a more efficient alternative.

Lukianova-Hleb et al, 2013 present a non-invasive, transdermal detection method for Plasmodium falciparum and Plasmodium yoelii. The technique involves emitting a safe, near-infrared, picosecond laser through the skin. This generates a transient vapour nanobubble around hemozoin- containing red blood cells. Hemozoin, being a unique component of all blood-stage malaria parasites, should increase the specificity of the test. These nanobubbles are then detected and characterised based on two parameters-the duration of optical scattering and the acoustic trace, which both correlate with the lifetime and therefore the maximal diameter of expanding and collapsing nanobubbles.

This method allows for highly sensitive detection of malaria infections with as low as 0.00034% parasitaemia. Although in the early stages of development, the technique eliminates the need for invasive blood sampling, laborious and skilled microscopic examination, or additional reagents, and therefore has great potential for field-use.

The diagnosis of a lot of parasitic and vector-borne diseases are heavily reliant on Rapid diagnostic Tests (RDTs), most commonly in the form of immunochromatographic tests (ICTs). These tests are based on the presence of pathogen-specific antigens detected by immobilised antibodies conjugated to molecules that produce a colour change.

Last summer Google’s Android-powered, voice-activated computing system in the form of eyewear- “Glass” was released in the UK. Feng et al (2014) have developed an automated RDT reading platform for the Google Glass. Using the in-built camera, the software is able to detect the results of multiple RDTs under natural illumination. The continuous wireless connectivity allows data to be uploaded to a centralised database where it can be visualised in the form of spatiotemporal maps, useful, for example, for investigating outbreaks in remote locations.

Although technology such as mobile phone-based readers and desktop readers are currently available, it is the combination of using hands-free image-capture together with the continuous wireless connectivity that makes this software unique. In areas where Wi-Fi is unavailable, the Google Glass can connect with iPhones/Android phones through Bluetooth to determine GPS coordinates. The software is also capable of reading various types of RDTs from different manufacturers, without needing updates. The expense of the Google Glass itself is an obvious obstacle, however remote analysis would allow the high throughput software to be used by technicians with relatively little training, cutting costs elsewhere.

On a side note- one of the key developers of this software is Professor Aydogan Ozcan (UCLA), who is also working on online games and mobile phone apps as crowdsourcing tools for biomedical image analyses. “Crowdsourcing of complex tasks to expert and non-expert populations has emerged as a powerful tool to solve intricate or time-consuming problems by merging individual human responses through statistical analysis” says Ozcan, 2012.

One such game is a BioGames malaria-diagnosis gaming platform, which has accrued thousands of online gamers from around the world over the past 2 years. The game trains individuals to identify malaria parasites in blood film images, giving the individual a quantified score based on their false-positive and false-negative rates at the end. Collectively, relatively poorly trained diagnosticians came close (within 1-2%) to achieving the accuracy of an expertly trained diagnostician in their trials. 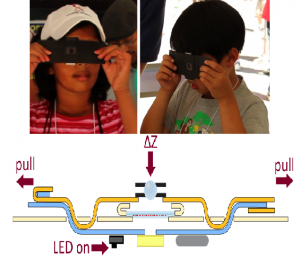 Malaria is one of many diseases that relies on microscopy as the gold standard for diagnosis and therefore suffers from the pitfalls described above. This is why The Foldscope is number one in our list.

The pocket sized microscope is designed for large- scale manufacturing, bringing the cost of the parts down to less than a US dollar. Yes, less than one US dollar! The origami-based design enables construction from a single piece of paper with no external power source, resulting in a flat, highly compact product weighing less than a couple of nickels. It is capable of brightfield, darkfield and fluroscence microscopy, it provides over 2000x magnification with submicron resolution. It is no flimsy product either, having been demonstrated to survive being dropped from a 3 –storey building and being stomped on by a person.

The Foldscope is unusual in that it anchors the sample at a fixed location, whilst the optics and illumination stages are moved in sync. Mounted slides are inserted into the device and panning and focusing is achieved with the user’s thumbs. The ingenuity of the pocket-sized design is largely based on the tiny ball lens’ which allow magnification of x100-2000, but unfortunately also mean that not all areas of the field can be in focus at any given time i.e. the centre of the field is least distorted.

Although it does not eliminate the need for trained microscopists in diagnostics, it could enable training for larger volumes of trainees in areas where microscopes are a commodity. The highly portable device is also well suited to extremely isolated field sites with no electricity. And of course the microscope is cheaply replaced with almost no maintenance required.

We hope that these innovations continue to inspire further development in the coming year and look forward to seeing what 2015 has to offer.