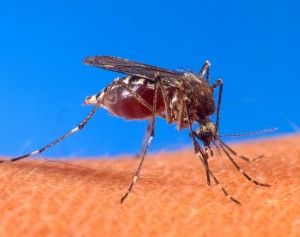 On August 15, 2013, the Florida Department of Health in Martin County reported 3 cases of locally acquired dengue fever in the Rio and Jensen Beach area (http://www.martincountyhealth.com/Documents/dengue/2013/denguealert82213.pdf). By September 18, 2013, the number of residents diagnosed with dengue fever has grown to 20, including the Indian Riverkeeper (http://www.theglobaldispatch.com/dengue-fever-cases-now-at-20-on-floridas-treasure-coast-75105/). Thirteen of the patients were residents of Martin County, while the rest has visited Martin County from other counties in Florida or out-of-state. Evidence points to a local outbreak of dengue fever, as these patients have not travelled to dengue-endemic countries recently. The outbreak has garnered significant media coverage, from NPR (http://www.npr.org/blogs/health/2013/09/12/221791874/florida-officials-take-swat-at-mosquitoes-with-dengue-fever) and the Al Jazeera America (http://america.aljazeera.com/articles/2013/9/12/dengue-fever-presenceinfloridaataprettyseriouslevel.html) to the New York Times (http://www.nytimes.com/2013/09/30/us/in-florida-the-front-lines-of-a-war-with-mosquitoes.html?partner=rss&emc=rss&_r=0).

This isolated outbreak fits into a general pattern indicating that dengue fever is becoming endemic in southern Florida.

Dengue fever was well known in Florida until successful mosquito eradication efforts in the 1940s (http://www.slate.com/articles/health_and_science/pandemics/2012/12/dengue_fever_in_united_states_breakbone_fever_outbreaks_florida_texas_and.2.html). Since that time, it has become the most important arboviral disease globally, and the second most important mosquito-borne disease after malaria (http://en.wikipedia.org/wiki/Dengue_fever). Dengue fever is caused by four distinct but related viruses (serotypes) in the family Flaviviridae. These viruses are transmitted primarily by the yellow fever mosquito (Aedes aegypti), and secondarily by the Asian tiger mosquito (Aedes albopictus). Dengue fever causes a debilitating flu-like illness with fever, headache, muscle and joint pains, and a characteristic skin rash, and can leave patients exhausted and fatigued for months. Repeated infections with multiple serotypes lead to potentially fatal dengue hemorrhagic fever (DHF) or dengue shock syndrome (DSS). It is endemic in more than 110 mostly tropical countries, and it infects 50-390 million people annually, leading 500,000 hospitalizations and 25,000 deaths. Its incidence has increased 30-fold since 1960, largely due to uncontrolled urbanization, increased international travel, and population growth.

Dengue fever has been absent from Florida since 1940s, except for imported cases from endemic countries.  However, in 2009, an astute physician in New York diagnosed dengue fever in a female patient returning from vacation in Key West, FL, marking the return of the virus to the Sunshine State (http://www.cdc.gov/mmwr/preview/mmwrhtml/mm5919a1.htm?s_cid=mm5919a1_e). In 2009 and 2010, 90 cases of locally acquired dengue fever have been reported in Key West, FL. Since 2010, there have not been dengue fever cases in Key West, but isolated cases have been reported in 2011 in Tampa, Miami, as well as Palm Beach and Martin Counties; and in 2012 in Miami-Dade and Osceola Counties (http://diseasemaps.usgs.gov/2012/del_us_human.html).

While these isolated cases seem to be unrelated, and could be caused by multiple independent introductions and transmission of dengue viruses to Florida, recent genetic analysis provide evidence to the contrary. Sequences of dengue-1 viruses isolated in Key West/Monroe County all clustered together on a phylogenetic tree, separately from other viruses isolated from patients in Florida (http://wwwnc.cdc.gov/eid/article/19/4/12-1295_article.htm). In addition, 5% of Key West residents have been found to have antibodies against DENV-1, indicating ongoing transmission (http://wwwnc.cdc.gov/eid/article/18/4/11-0968_article.htm). Both of these suggest that dengue viruses have become endemic in Florida at a low level.

As usual with vector-borne diseases, it is very hard to predict the future course of dengue fever in Florida. However, what we know  is not encouraging in terms of an easy eradication. The number of reported cases so far is likely a vast underestimate of the total number of human infections, as 80% of cases are asymptotic and additional patients might have mild symptoms that go unreported. A proportion of these asymptomatic cases might have sufficient viraemia to become a source of further infection, despite their lack of symptoms (http://0-www.ncbi.nlm.nih.gov.brum.beds.ac.uk/pmc/articles/PMC3315825/). It has been shown elsewhere (e.g. in Iquitos, Peru) that the movement of people (either travelling while viraemic, or visiting patients) is the main way in which dengue viruses spread geographically (http://www.pnas.org/content/early/2012/12/26/1213349110.abstract.html?etoc). Therefore, there is ample opportunity for dengue viruses to travel across Florida once established. Aedes aegypti, the primary vector, is established in southern Florida (http://entnemdept.ufl.edu/creatures/aquatic/aedes_aegypti.htm), while Aedes albopictus is widespread throughout the south-eastern United States (http://www.cdc.gov/ncidod/dvbid/arbor/albopic_97_sm.htm). Thus, vectors are readily available for transmission.

For now, the Martin County Health Department does everything in its power to put an end to the local dengue outbreak. Blood donations have been stopped in the area, in order to protect the blood supply (http://www.wptv.com/dpp/news/region_martin_county/dengue-fever-blood-collections-suspended-in-martin-and-st-lucie-counties-because-of-dengue-fever). In addition to repeated adulticide treatment in the affected area, they have conducted a door-to-door survey to educate residents about dengue fever and the best ways to protect themselves from mosquito bites (http://www.martincountyhealth.com/Documents/dengue/2013/dengueupdate92513final.pdf). They also took voluntary blood samples to test residents for antibodies against dengue – results of these are eagerly anticipated. Unfortunately, surveys of residents backyards have shown that a large proportion have vector mosquitoes breeding in and around the houses. The number of cases has not increased since September 18, so there is hope that the efforts of the Health Department are paying off. However, the overwintering of dengue in Key West between 2009 and 2010 shows that low level transmission can go on despite the onset of winter, and we have to keep an eye for dengue in the area in the future. Additionally, similar conditions exist throughout southern Florida, and outbreaks like this one can occur elsewhere as well. Florida, given its proximity and similarity to many parts of the Caribbean where dengue is endemic (e.g. Puerto Rico), is likely to serve as a gateway for the re-emergence of dengue into the US (http://afludiary.blogspot.com/2013/08/florida-dengue-count-rises-to-8.html). How far it will spread, we will have to wait and see.

[…] from the start, BugBitten was in the thick of things, reporting on the outbreak of dengue in Florida (confirming that the disease had once more returned to the state) and the re-emergence of […]