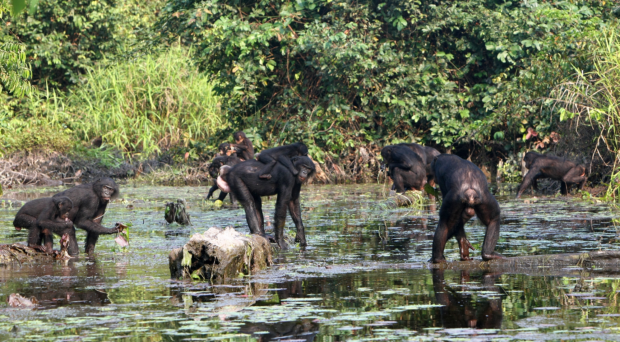 Apes are smart – they can read minds, manipulate the behavior of friends and foe, and have precise mental maps of their forest environment. Such advanced cognitive skills require a big brain to process complex information, and a long phase of development to observe others, learn skills, and acquire social and manual tools. Essential ingredients facilitating this life style are time, parental support – and iodine.

Iodine is a rare mineral which is critical for development, health, and reproduction in modern humans. It is reasonable to assume that it was equally important for our ancestors. Given that normative human development depends on iodine, it is thought that expansion of brain tissue, its structural differentiation, and the related social and cognitive skills that emerged during human evolution were contingent on enhanced intake of iodine.

Rich sources of iodine can be found in coastal areas. It is for this reason that researchers consider such habitats as crucial for the emergence of “human” traits. Adapting to a diet of sea food, weeds, and salt water has boosted brain growth and fueled other physiological systems that control nutrition, development, and maturation. This raises the question of how organisms which became used to the unlimited intake of “brain food” were able to migrate away from the coast and invade habitats that are deficient of iodine such as continental forests, mountain areas, and dry savannas.

Fossil evidence demonstrates a steady increase in brain size which is suggestive for sufficient iodine intake. But what sources did our ancestors use to meet their enhanced nutritional requirements. One way to obtain this information might be to look at apes, humans closest living relatives and study their food habits. Many of them live in areas that have been occupied by prehistoric human populations and one can infer that our ancestors relied on the same food sources that make up the diet of contemporary wild ape populations.

The diets of bonobos (Pan paniscus) and chimpanzees (P. troglodytes) show some remarkable similarities to that of humans: Both species feed on leaves, herbs, and a variety of energy rich plant foods such as fruit pulp and seeds. Some populations dig for roots and other underground organs, extract honey from tree holes, and consume the meat of other vertebrates. While many populations of bonobos and chimpanzees inhabit areas considered to be iodine deficient compared to human standards, there is good reason to assume that sources of environmental iodine used by wild apes are sufficient to prevent the detrimental effects of iodine deficiencies that affect humans and nonhuman primates.

Although research on diet composition and feeding behavior of bonobos, chimpanzees and other apes have been investigated in great detail, the intake of iodine remains virtually unknown. The first data on this topic are available in a recent study published by BMC Zoology. Alerted by the behavior of wild bonobos at the research site of LuiKotale in the Democratic Republic of Congo, researchers from the Center for Research and Conservation (Antwerp), the Max-Planck-Society (Leipzig), and John Moores Liverpool University, launched a project to investigate the reason for the use of aquatic terrain by the otherwise terrestrial apes.

The continental part of the Congo basin is considered as a region where natural sources of iodine are scarce and where humans depend on supplementation of iodine. However, the results of this study show that the Congo basin is not devoid of natural sources of iodine per se and that some species of aquatic herbs contain iodine concentrations that are equivalent to those of marine algae (a substantial source of iodine). Bonobos and other apes are well known to use aquatic food sources and the results of our study suggest that iodine may be the driving force for this behavior. Projecting back towards the time of human migration across the African continent, populations moving into the Congo basin would have found sources of iodine to support the lives and health of migrants that were primed by the rich sources of coastal habitats. 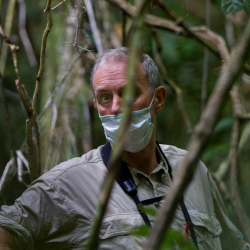 After studying biology and anthropology at Munich University, I have been affiliated with the Indian Institute of Science (Bangalore) and several institutions of the Max-Planck-Society. Together with my wife, Barbara Fruth, who is reader at the John Moores University of Liverpool, I am directing field work at LuiKotale (DRC). My current research interest focuses on the following question: what are the environmental conditions under which bonobos have evolved and how do bonobos differ from their closest living relatives, the chimpanzee and from modern humans? What were the causes for the divergent evolution of bonobos and chimpanzees? Have males and females been affected differently by the divergent development and if so, what were the driving forces to induce changes in one but not the other sex? In order to tackle these questions, I am using information from wild bonobos observed at Lomako (1989-1998) and LuiKotale (since 2002). Current projects aim at developmental processes in bonobos and chimpanzees. Integrating data on developmental changes in physiology, behavior and morphology is one way to explore the emergence of differences in social behavior that are so prominent in adult individuals. I am convinced that it needs information from the two sister-species (bonobo and chimps) to model the evolutionary history of our own species. Understanding the driving forces that led to their divergent evolution will help us resolving the exciting question of why we became a species that combines such opposite characteristics such as empathy, cooperation and food provisioning, the strategic use of non-reproductive sex, and merciless aggression.