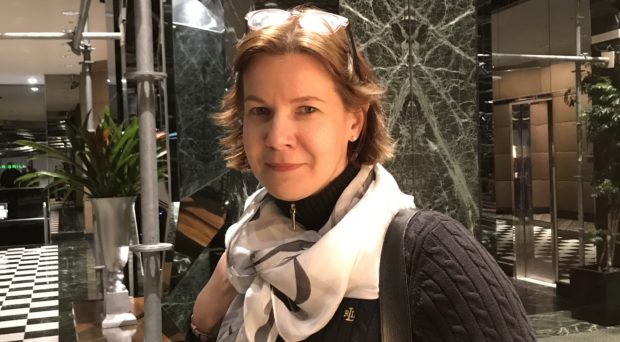 One of the speakers at the United Nations for International Women and Girls in Science day was Danielle Stodilka, a materials and data scientist from Canada who is a senior fellow with the Canadian International Council.

Danielle received a PhD in Materials Science and Engineering from the University of Florida in the early 1990s, at a time where very few women were involved in this field.

According to statistics presented at the UN meeting, biology has perhaps the highest percentage of women representation among the STEM fields, with engineering containing the least, at around 11% and shrinking.

“In my country, the recruitment and retention of women in engineering was still overcoming the impact of the Montreal Massacre in 1989”, she says, “I enrolled in engineering in the early 90’s to pay respect to the young women who lost their lives, while at the same time knowing they could have mentored me”.

What’s most remarkable about Danielle’s story is how closely it aligns with so many stories reiterated by female speakers during the conference; while pursuing a master’s degree as one of the few, if not only, women in her field, Danielle’s scientific work was appropriated by males in her research group without giving her credit. This behavior was overlooked at the institution, where all of the superiors were male and there was very much an “old boys club” atmosphere in the laboratory.

Danielle references this to “the Matilda effect”, where the contributions of women in science are overlooked, citing an article that discusses the phenomenon in detail.

Some women have sued institutions for this unethical behavior, others have protested within the departments, all to varying degrees of success, but ultimately this behavior is still seen today. The fact that this is going on should be a high level of concern for all STEM institutions and industries, and should be on the radar for all funding institutions.

However, Danielle’s story is not a negative one, but very much a positive one, as she met this situation with resilience and perseverance. She told another story that perhaps many of our readers can relate to:

One day, she decided to leave the dolls for a little while and join the boys so that she could play with the blocks as well. At that point, a young boy told her she had no right to do so, since she was a girl.

“I in no way advocate violence,” she says with wry grin, but it did lead to a bit of a tussle.

Danielle went on to receive accolades for her work, and entered the field of Materials Science and Engineering in the early 1990s at a time when very few had been involved in the field. She went on to pursue a PhD in America on a post-graduate fellowship, when she found a female mentor in Florida in a field of her interest.

Finding a science mentor is perhaps the greatest challenge facing women in STEM today, because there are so few women to begin with, it can be hard to find someone who can provide advice for navigating a particularly competitive and demanding field.

Danielle strongly encourages all women and girls to join the field of science, particularly that of engineering. She says this would be an excellent strategy to avoid the Matilda effect because she believes if more women are physically present and involved in decision making processes, science will become a more female-friendly workplace.

She went on to state that having more women involved in the STEM fields will benefit all of humanity, because they can offer new perspectives, not only for safety, efficiency, and aesthetics but also in new research discoveries and our understanding of the universe.