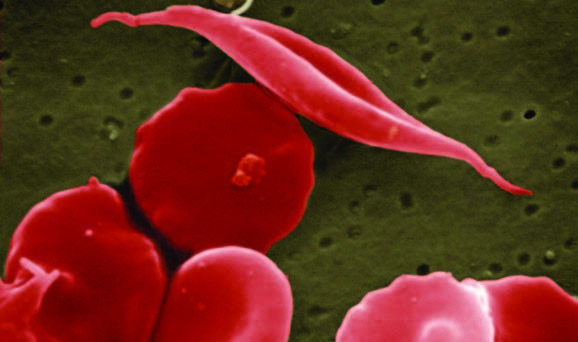 According to the World Health Organization 5% of the world’s population carries a hemoglobin disorder gene and 300,000 infants are born each year with hemoglobin disorders including SCD. Furthermore, the vast majority of cases of SCD occur in sub-saharan Africa.

SCD is a genetic disorder which results in a mutation in the hemoglobin gene and causes red blood cells to develop into a misshapen, sickle-like shape.  These red blood cells will stick to the inside of blood vessels thereby blocking appropriate blood flow.

Some well-established behavioral and drug techniques have been discovered to reduce SCD symptomology and include restriction from strenuous activity, giving plenty of fluids, balanced diet, dressing in warm clothing, anti-malarial drugs, and analgesics.  These treatments are often used to manage symptoms but not necessarily the physiological repercussions of having SCD. One potential treatment that has received some recent attention is Gum Arabic comes from the Acacia Senegal tree, and it has potential for treating SCD in more than one way.

Gum Arabic has been found to have potent anti-oxidant properties and has been shown to act as an effective anti-oxidant in animal models of chronic renal failure, urinary bladder cytotoxicity, and cardiotoxicity. Individuals with SCD have high levels of oxidative stress due to the formation of reactive oxygen species such as hydrogen peroxide. High levels of oxidative stress can have serious physiological repercussions such as endometrial dysfunction and multiple organ damage.

Kaddan and colleagues sought to determine whether Gum Arabic’s anti-oxidant effects could reduce the high levels of oxidative stress in individuals with SCD. Daily administration of Gum Arabic for 12 weeks resulted in an increase in total anti-oxidants and a reduction of the reactive oxygen species, hydrogen peroxide, as well as a decrease in malondiadehyde, an indicator of oxidative stress. Despite these positive findings, it is important to note that the authors measured only certain markers of oxidative stress and other physiological measures were not taken therefore it is difficult to conclude whether these anti-oxidative effects could actually reduce organ damage.

Gum Arabic could have beneficial effects beyond its anti-oxidant properties. Gum Arabic could also increase the production of fetal hemoglobin, a form of hemoglobin with a greater affinity for oxygen compared to adult hemoglobin. Fetal hemoglobin appears to prevent red blood cells from forming the sickle shape thereby decreasing the chance of vaso-occlusive events. Hydroxyurea is an FDA approved drug that can increase fetal hemoglobin, however, since the drug is expensive and patients require frequent monitoring for toxicity hydroxyurea is not a realistic treatment for individuals in developing countries. Gum Arabic, however, is considered a safe dietary fiber and when orally administered for twelve weeks both children and adults experience an increase in fetal hemoglobin. These results seem promising but since neither painful crisis nor vaso-occlusive events were measured it is unclear whether this increase in fetal hemoglobin would have significant physiological effects.

There is still a significant amount of research required to find effective treatments in stabilizing, if not curing, this debilitating disease that results in low quality of life and an increased risk of premature death. Hopefully, when every World Sickle Disease Day arrives there will be more and more treatments to help this population. With foundations such as Sickle Cell Foundation, Sickle Cell Cure Foundation, and sources of public funding the lives of these afflicted individuals will improve.

Editor at BMC
Ben is an Editor for the BMC-series for BMC Psychiatry, BMC Psycholoogy, BMC Pharmacology and Toxicology, BMC Neuroscience, and BMC Neurology.
Before joining BioMed Central, he received his PhD in psychology at University of California at Davis, which was followed by a post-doctoral position at New York University Langone Medical Center and a second post-doctoral position at New York University. Ben’s focus on biological psychology has involved studies on the neurobiology of monogamy and pharmacological treatments for posttraumatic stress disorder.