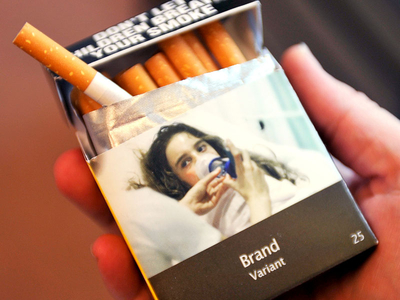 UK legislation has banned the tobacco industry from using branding on their cigarette packaging. Following the ruling, all tobacco packaging in the UK must be olive green and picture health warnings must cover 65% of the front and back of every packet of cigarettes, with additional warnings on the top.

For years now, researchers have tried to answer whether plain cigarette packaging has the potential to reduce smoking. A large number of experiments, surveys and focus groups have found that standardized packaging changes attitudes and beliefs around smoking. As an example, an article published at the end of 2015 in BMC Public Health shows how packaging and product configurations may impact consumers’ perceptions of product health effects and attractiveness. Findings from this study demonstrate that consumer product perceptions can be influenced by elements of cigarette design, such as the presence and color of the filter tip.

An overview of systematic reviews on the health-related effects of government tobacco control policies, published in BMC Public Health, finds health warning labels lead to reductions in tobacco use and increases in motivation to quit, quitting likelihood and likelihood of abstinence after quitting. Potential reasons behind these effects are depicted in another article published in the journal which shows that perceived severity, feelings of susceptibility, and negative emotional reactions—such as fear and concern for others—are major reasons why participants are motivated by labels portraying negative effects of smoking.

Unfortunately, due to the nature of research required, it is less clear whether plain packaging will change actual smoking behavior in the long run. A randomized controlled trial looking at the impact of plain packaging on smoking behavior and attitudes, found that plain cigarette packs reduced ratings of the experience of using the cigarette pack, and ratings of the pack attributes, and increased the self-perceived impact of the health warning. However, the authors of the research published in BMC Public Health did not find that it changed smoking behavior during the short term period of the trial.

Although a number of countries have banned misleading cigarette descriptors such as “light” and “low-tar” as called for by the WHO Framework Convention on Tobacco Control, these laws do not address the underlying cigarette design elements that contribute to misperceptions about harm, which also has implications for how cigarettes are packaged. Annika Green et. al. carried out research looking at the association between the belief that “light” cigarettes are smoother on the throat and chest and are less harmful than regular cigarettes. This work provides further evidence of the need to prohibit cigarette design and packaging features that contribute to the perception of smoothness.

With Australia and now the UK being the only countries in the world to introduce standardized packaging, it is hoped that related research such as that we have published and continue to publish in BMC Public Health will play a role in the movement towards enforcing implementation of standardized packaging as part of tobacco control strategies across the globe.