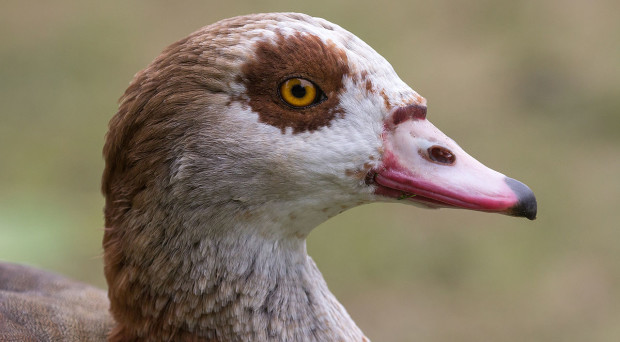 Urban sprawl negatively impacts many species, reducing the natural habitats they rely upon for survival. For some species however – those able to adapt to urban environments – it presents an opportunity for expansion.

One such species is the black sparrowhawk, which over the last 20 years has expanded its traditional South African range into the urban habitats of Cape Town. The numerous doves and pigeons living in this environment provide abundant food for the sparrowhawks and they seem to be thriving in their new home; having only arrived in the 1990s, around 50 pairs now breed in the Cape Town area.

However this new habitat brings not only benefits, but also challenges. One such difficulty is a new neighbour in these urban areas: the Egyptian goose. Like the black sparrowhawk, Egyptian goose numbers have increased considerably in Cape Town in recent years, and the two species do not always get along.

Egyptian geese are unable to build nests. Sometimes they will just lay their eggs on the ground, but they will also happily use the nests of other bird species. These nests might be abandoned, but not always; geese are capable of taking over nests by evicting the current occupants.

There is little a sparrowhawk can do to defend its nest. While an adult sparrowhawk is a fearsome sight to the doves and pigeons they prey upon, they are less than half the size of an Egyptian goose. Combined with the goose’s aggressive nature, fighting back is not a viable option; in most cases abandoning the nest is the sensible choice.

This harassment and usurpation of their nests takes its toll on black sparrowhawk breeding success; previous research has found that pairs breeding in territories where geese usurped nests produce an average of 0.76 chicks per breeding attempt, compared to 1.58 chicks for pairs breeding in goose-free territories.

If fighting back is not an option, how can the sparrowhawks combat their aggressive neighbours? One possible tactic is to build multiple nests, providing backup options should the primary nest be taken over. It is indeed relatively common for black sparrowhawks to build more than one nest (usually 2-3, but up to 6 have been seen on a single territory) and it has been suggested this is more common on territories where geese are present.

However there are other reasons why sparrowhawks might build multiple nests, such as advertising to other sparrowhawks that their territory is occupied. Without formal testing it is hard to be sure of any link between multiple nest building and presence of geese.

It was this that Petra Sumasgutner and colleagues at the University of Cape Town aimed to test in their new research, recently published in BMC Evolutionary Biology. Researchers at the institute have been tracking the breeding success of black sparrowhawks in the Cape Town area for 14 years. This long-term data set enabled Dr Sumasgutner and colleagues to determine what changes to their breeding behaviour, if any, the sparrowhawks have made in response to the presence of geese.

As the researchers predicted, there was a link between goose activity and multiple nest building. Sparrowhawks breeding in territories that experienced nest usurpation built significantly more nests on average than pairs breeding in territories that never had nests taken over. It appears that birds that are not usurped by Egyptian geese continue nesting as normal, with a single nest, but when goose usurpation occurs the sparrowhawks adapt and start building multiple nests.

Notably the sparrowhawks seem to build multiple nests before laying and incubating eggs in one of them. This suggests that building of multiple nests is not just a simple case of replacing a nest already taken by a goose, but rather is a specific tactic to guard against the possibility of nest usurpation.

If so, it is a successful tactic. The researchers found that, as expected, territories experiencing nest takeovers produce on average fewer chicks. However, those birds that build multiple nests largely overcome this deficit in reproductive success. Sparrowhawks that are able to adapt with the new tactic of multiple nest building can still successfully produce chicks despite the presence of covetous geese.

This isn’t the only trick the sparrowhawks have to avoid goose problems. It was already known that black sparrowhawks in this new population around Cape Town breed earlier in the year than in traditional sparrowhawk habitats. The researchers found that birds breeding later in the year were considerably more likely to have nests taken over by geese. This suggests that at least one reason for the switch to earlier breeding in the Cape Town sparrowhawks is to reduce interactions with the geese.

Black sparrowhawks have found that moving to a new neighbourhood can be challenging when the neighbours are unfriendly. However, with adaptable behaviour they seem to be overcoming these challenges. The sparrowhawk population has continued to grow over the last 20 years, suggesting it will take more than some angry geese to stop them enjoying their new life in the city.