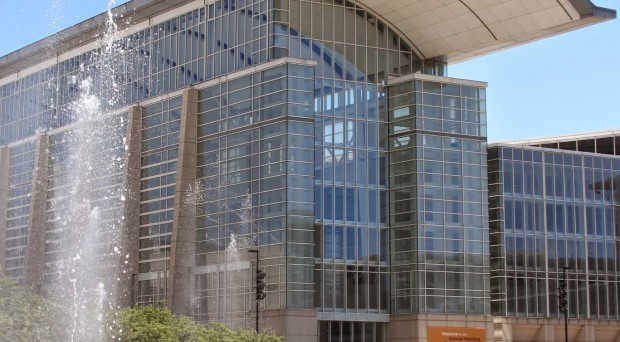 The American Public Health Association (APHA) concluded its 143rd Annual Meeting and Exposition on November 4th in the vibrant city of Chicago. The largest public health gathering in the world, which never fails to impress, saw more than 1,000 scientific sessions and 13,000 public health officials and experts come together to present the latest research and explore new strategies to address today’s leading health challenges in the context of “Health in All Policies”, this year’s theme.

Spanning an incredibly diverse array of subject areas, the meeting focused on the complex factors that influence health and equity, also referred to as the social determinants of health, including educational attainment, housing, transportation options and neighborhood safety. In representing BMC Public Health, I was once again privileged to bear witness to the intellectual opportunities provided at APHA’s meeting and gain a wider understanding of the importance of policy as a health improvement tool. To attend all sessions of interest was unfortunately impossible, but some sessions, which I would like to share with you here, stood out as being particularly noteworthy.

With refugees and asylum being at the top of the media and policy agenda in Europe this year, this was a very timely session. Alice Rothchild, Ahlam Chemlali, Zaher Sahloul and Associate Editor of BMC Public Health, Sawsan Abdulrahim, gave intriguing talks on the mental and physical health of refugees in Gaza, violence in post-conflict Libya and the health determinants among Palestinians displaced from Syria in Lebanon. Shocking statistics were provided, particularly by Dr Rothchild who stated that Gaza will no longer be livable by 2020, that there will be no drinkable water in the region by 2016 and that there are currently 100,000 internally displaced people; over 370,000 children require psychological assistance as a result of the war and ¾ of the population is food insecure. Furthermore, maternal mortality doubled just this year and ¼ of the population of women are at reproductive age requiring health care, which has serious implications considering the poor availability of health services.

Dr Abdulrahim’s research group carried out a vulnerability assessment in Lebanon in 2014 and stated that vulnerability sectors with regards to refugees include economic, education, food security, health, non-food items, protection and shelter. Dr Abdulrahim mentioned that many are coping with food insecurity and a family can easily go from being moderately vulnerable to severely vulnerable which needs to be considered in future policies. Dr Abdulrahim’s report is available on the the United Nations Relief and Works Agency website.

Climate change was a highlighted hot topic this year at APHA. Marcus Sarofim, who is in the Climate Change Division of the U.S. Environmental Protection Agency, spoke about modelling the health impacts of climate change which are meant to advance quantitative projections of climate impacts on health in the USA. Dr Sarofim spoke specifically about the potential impact of climate change on the beginning of annual lyme disease cycles and one of his group’s studies which looked at this found that lyme disease onset in mid-Atlantic states is more sensitive to a degree of warming than onset in northern states. While many infectious diseases were once all but eliminated from the United States, there’s evidence that climate change is a factor that could help them expand their range, bringing this topic to the forefront of the public health policy agenda.

An area of heightened attention considering that there are 32,000 deaths from guns in the USA every year, this was by far the most interesting session I attended. Daniel Gross, Gary Slutkin

and David Hemenway gave moving talks about the context of gun violence in public health and emphasized the importance of ensuring this issue is addressed as a public health problem. Among high-income countries, gun violence is uniquely an American problem; there is an 18 times higher risk of death from firearms in the USA than in other high-income countries. David Hemenway, an economist and director of the Harvard Injury Control Research Center and the Harvard Youth Violence Prevention Center, defined the public health approach needed to tackle gun violence which he emphasized should be population based, system based and broad and inclusive.

Dr Slutkin gave a detailed explanation as to why violence should be considered a health problem, stating that it has health effects and that exposure to violence can lead to other diseases. He compared violence to an infectious disease as it is capable of being transmitted; that the number one risk factor for violence is, in fact, violence itself.

Following another successful completion of APHA’s premier event for tracking the latest research and trends in the public health field, we look forward to attending next year’s meeting in Denver, Colorado and learning more about strategies and solutions to addressing public health challenges around the globe.