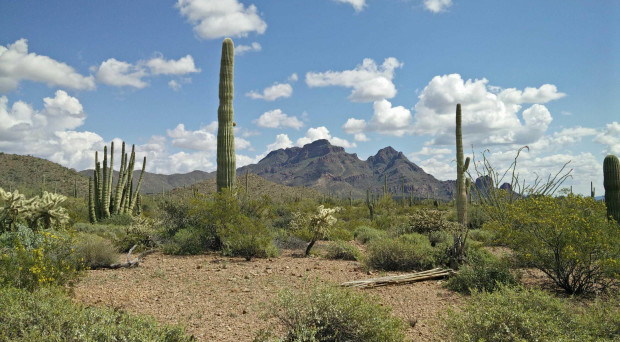 Daniel is currently pursuing a PhD in Ecology and Evolutionary Biology at the University of California, Irvine. He also works as a National Park Service Young Leader in Climate Change jointly at Saguaro National Park and the Sonoran Desert Network in Arizona.

After completing his BA in Biological Anthropology at New York University, he then went on to conduct research at the Rocky Mountain Biological Laboratory in Colorado. He then completed an MS in Environmental Systems at the University of California, Merced conducting research as part of an alpine treeline climate change experiment in the Colorado Rockies.

Daniel finds inspiration in the places he works, and says “parks and protected areas are tools for education not only because of their beautiful landscapes but also because they house examples of what we know about the natural world, wonderful histories of people, cultures, and places, and how we have an impact on the world.

“My greatest inspiration comes from the fact that parks, although of high conservation value, are also tools for scientific discovery and exploration so we can better understand the world and our experiences.”

Here he captures the Sonoran desert in North America at a time of year where it becomes an oasis: the winter growing season.

Can you explain a bit more about this image?

This image is a perfect representation of the Organ Pipe Cactus National Monument and desert processes. There is a single organ pipe cactus (Stenocereus thurberi) in the left portion of the picture which is interesting because the majority of the species distribution is further south of the US-Mexico border, in the Mexican state of Sonora, making this park a relative gem.

Saguaro cacti (Carnegiea gigantea) dominate the photo in my opinion with their long bodies pointing to the clouds. Triangle-leaf bursage (Ambrosia deltoidea), creosote bush (Larrea tridentata), and palo verde (Parkinsonia microphylla) dominate the remaining plant community with their vivid greens during this time of year.

However, the beautiful reminder of time scales is ever present not only with this seasonal burst of color but also the visible erosion, the downed saguaro skeleton and the geologic uplift in the mountains, all illustrating that how we define and understand landscapes is a matter of perspective in terms of spatial scales and temporal scales.

Accounting for nearly one third of the Earth’s land surface, deserts are not to be underestimated or undervalued. Deserts are alive.

Where was this photo taken and why were you here at this time?

The view is from the stunning Ajo Mountain Drive looking across to Diaz Peak and Diaz Spire in between the two saguaro cacti.

This photo was taken in Organ Pipe Cactus National Monument in southern Arizona. The view is from the stunning Ajo Mountain Drive looking across to Diaz Peak and Diaz Spire inbetween the two saguaro cacti.

My dissertation research focuses on how climate change impacts our National Parks and protected areas. Part of my fieldwork involved collecting tissue samples of the invasive Sahara mustard across North America. The research I was doing here was just one of 11 National Parks and Monuments I focused on.

What did you find most interesting about it?

I find this photo to be particularly amazing because there is so much happening that we can’t see in the photo. But the fact that it’s happening directly and indirectly explains why the photo is composed this way.

For example, saguaro cacti are part of a wonderful nurse-protégé relationship with the shrubs and tree species that nurse them. Although we know the nurses likely provide protection from herbivory, extreme temperatures during both day and night and during different seasons in the early stages of their lives, the dependency of saguaro cacti on their nurse plants is poorly understood.

I suspect it all comes back to the main driver of systems like these: water. I am currently working with researchers with the National Park Service to uncover the answers to hypotheses about water relations between saguaro cacti and their nurse plants.

Why is there a stigma of barrenness associated with this extreme landscape?

The stigma of barrenness with extreme landscapes like this is purely an anthropomorphic projection of reality. The word ‘extreme’ is very often a subjective and relative term to how humans view and believe environments to be.

All of the living organisms visible in this photo have evolved over millions of years to tolerate the ‘extremes’ we as humans experience in the desert.

All of the living organisms visible in this photo have evolved over millions of years to tolerate the ‘extremes’ we as humans experience in the desert. Adaptation and selection work to remove ‘extremes’.

However, the impacts of human-induced climate change are creating actual extremes that are challenging many of these organisms because the climate they are adapted to no longer exists and continues to change.

Although drought tolerance is often deemed an essential trait of desert organisms, the duration and intensity of drought in these regions, the changes in seasonal precipitation regimes, and the interaction of this with increased temperatures will alter the landscape in this photo as organisms will be pushed in terms of physiological tolerance.

Barrenness in deserts is also a false reality propagated by popular media and our fear of the unknown. Desert landscapes are often used in popular media as backdrops to post-apocalyptic stories of struggle. The color brown is viewed in a negative context as lifeless and ugly, and brown landscapes are thus viewed as wastelands.

Lastly, the struggle to promote scientific literacy in the United States and globally reinforces visions of nature based heavily on romantic ideals and, as a result, fail to incorporate scientific understanding of diverse landscapes that do not typically fit these ideals.

My hope is that people who see this photo are inspired not only by what they see as a romantic vision of nature but also by the beauty that comes from understanding desert landscapes and the rest of the world from a scientific perspective.

How different would you expect the image to look during the summer season?

Interestingly, there are sort of two summer seasons in the Sonoran desert.

Interestingly, there are sort of two summer seasons in the Sonoran desert. There is the early summer drought where most of the deciduous vegetation would lose their leaves. Saguaro and other cacti would retain their colors but may appear more slender as they patiently wait for the second summer season: the summer monsoons.

Once monsoonal moisture moves up from the gulf of California, the desert bursts to life once again, palo verde trees and ocotillo shrubs will produce leaves overnight (sometimes only a few hours after it rains). In some areas, a second and distinct cohort of annual species break dormancy. So it is quite possible that this image during the summer season would appear almost identical depending on how one timed it.