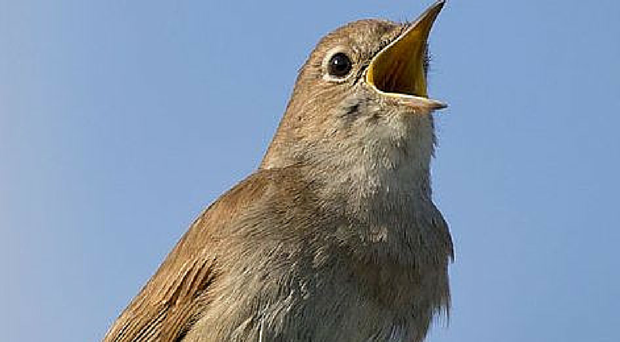 The secret message of birdsong

Spring would not be the same without the sound of birdsong filling the air. Yet while pleasurable to our ears, for birds themselves these songs are serious business. Song is crucial for many male birds during the spring breeding season in both marking out a territory and attracting females.

Why do female birds so often choose their mate by his song? The assumption is that a male’s song acts as a signal of his quality; in this sense birdsong acts in the same way as a peacock’s tail or the ability of a male deer to best its rivals in combat. A bird with a good song is advertising its superiority over males with lesser singing abilities.

In species like peacocks and deer, where the only contribution of males to child-rearing is providing the sperm, the benefits gained by females from mating with the best males must be entirely indirect; namely, better genes for their offspring. However in species, like most songbirds, where males contribute to parental care it is possible that females are choosing males who will contribute more to rearing their young.

A reasonable hypothesis, but one for which the evidence has been mixed. A handful of studies have linked song quality and paternal performance in birds (for example in sedge warblers), but other studies (for example in pied flycatchers) have not supported this theory.

New research on nightingales, led by Conny Bartsch of the Freie Universitӓt Berlin and published today in BMC Evolutionary Biology, provides some of the strongest evidence yet that a male’s song is an honest signal of their ability to raise chicks.

The nightingale is renowned for its song. This is due not just to the male’s unusual habit of singing at night (hence the name) but because of the sheer complexity of their singing: a single male can combine over 180 different elements like whistles, trills and buzzes into its song. The nightingale has long been admired for the beauty of its singing, inspiring poets and writers like Shakespeare, Keats and T.S Eliot.

The evolution of such complexity strongly suggests that the song is acting as a signal of male quality. This is especially true as males vary considerably in the size of their singing repertoires; some males are better singers than others.

While we still do not fully understand how female nightingales judge male songs, there is evidence that females judge individual song components when choosing a male to mate with. In turn, this suggests a possible link between male song complexity and their contribution to rearing chicks.

To test this hypothesis, the researchers studied a population of nightingales in Potsdam, Germany that have been monitored for a number of years. Twenty males, identifiable by rings on their legs, were tracked throughout a breeding season.

Firstly, the songs these males sang early in the season were recorded and analysed. The researchers focused particularly on the number of song elements (like buzzes and whistles) used and the orderliness of the song (i.e. the ability to repeatedly sing the same sequence of song types).

Later, once the males had mated with a female and the chicks had hatched, the feeding rate of each male (based on how often they visited the nest) was tracked across several days when their chicks were aged between 5 and 12 days old (a crucial time for the growing chicks).

The first key result was that the twenty males did differ substantially and consistently in their feeding rates, ranging from an average of seven visits to the nest per hour, up to almost 20 visits in a single hour. Some males were better fathers than others.

Did their songs predict who would be a good father? Indeed they did: there was a strong correlation between the complexity and orderliness of a male’s song and his feeding rate. This was true even when accounting for how many chicks each male had to feed.

Notably, previous research has shown that older males sing more orderly songs; this might suggest that these males have greater experience of raising chicks and finding supplies of food in these breeding grounds. This provides one possible link between song quality and parental skills.

Due to the difficulty of collecting such data, the researchers were unable to determine the effect of male feeding rates on their chicks size and likelihood of survival. It is also unclear how the females respond to differences in the efforts of their partners. It is possible that females could increase their own feeding efforts to compensate to some extent for the failures of a poor father. Conversely, in other bird species females have been shown to increase their own feeding efforts when mated with what they perceive to be a good male.

Either way, the male’s efforts are surely crucial to his chicks well-being. As with all songbirds, many nightingale chicks will starve while still in the nest, while for those that do leave the nest, their weight and condition is likely to be vital to their chances of surviving their first winter. Given this, if males are signalling their quality as a future father through their song there are clear evolutionary reasons for females evolving to select mates on this basis.

From Aristophanes and Virgil to Keats and Shelley, nightingales have long been used as a symbol of the poet. Yet we find that a nightingale’s song is no insubstantial gesture of love; its song is an honest one, calling out its abilities to do the hard work of raising the next generation. If only the same could be said of every declaration of love we humans make to one another…

listen to ‘The nightingale's nocturnal song’ on audioBoom

And below, a video of a male feeding his chicks – remember, the best fathers are heroically doing this up to 20 times an hour. Audio and video clips courtesy of Conny Bartsch.