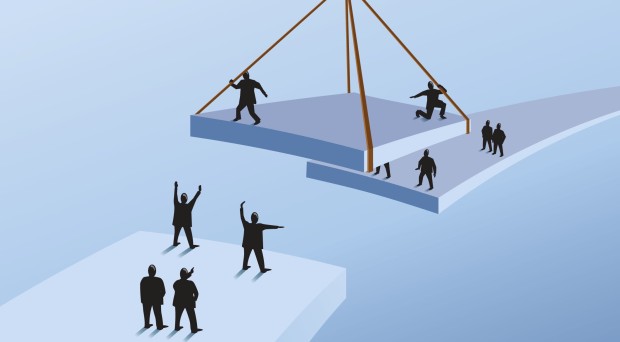 Garrett Brown is a reader in Political Theory and Global Ethics at the University of Sheffield. In this blog, he discusses a recent article published in BMC International Health and Human Rights by Gorik Ooms about the need for communication between researchers involved in different aspects of global public health research.

Global public health research is vital for policy makers to arrive at informed decisions about the policies they put in place. However, there is currently a false disciplinary boundary between two important forms of global health research with little discussion taking place across this line.

On the one side, we have observational, ‘evidence-based’ research, which is often labelled as ‘empirical’. On the other we have more normative based research, which seeks to determine rational justifications for why something ought or should be done, all things considered. In the later case, this form of research is often labelled as ‘opinion’ and it is often considered to be ‘evidence lite’.

What researchers on all sides often fail to recognize is that policy recommendations represent a mixture of both of these different types of research.

What’s the problem with this boundary between disciplines?
In my opinion, what ultimately results from this false division is that dialogue between these two sides of public health research is stifled in unconstructive and harmful ways.

In his recent article Gorik Ooms argues that there needs to be enhanced dialogue between these two public health disciplines and that such dialogue would produce better global health research.

He convincingly argues that researchers involved in more empirical research are often reluctant (unwilling or unable) to recognize the theoretical and normative starting points that underwrite the motivations behind their research.

Meanwhile, normative researchers remain on the periphery of public health debates because their contributions might be seen as mere ‘opinion’ and not representative of properly robust research.

As a normative theorist who happens to also conduct empirical research on global health policy, the presence of this division is disheartening. It is disheartening because it is intellectually weak and methodologically lazy.

What the philosophy of science tells us is that theoretical and normative positions underwrite all sorts of determinations about what issues should have priority, in judgements about what research should be funded, in what a scientific method should look like, and about how research should inform policy.

This is not to say that good evidence doesn’t assist in making these determinations – of course it does – and it should. The point is merely that there are ethical, moral, political, and other social rationales and reasoned considerations that also play an important role in how scientific processes operate.

Because of this reality, there is significant room for good normative research that seeks to better understand and better justify the strengths of these determinations. This is crucial for good research, and ultimately good policy, because these considerations not only help capture how the world is, but also provide systematic and analytically sophisticated justifications for why something ought to be.

Global health policy can’t be depoliticized
The maintaining of a strict division between these two disciplines is problematic because it has been used to suggest a rather apolitical rendering of how health policy is generated.

As an example of this, advocates of evidence-based policy have seemingly argued for policy making that is ‘depoliticized’ and non ‘value-based’. In doing so, these arguments often present a distinction between normative ‘opinion’ and empirical ‘evidence’.

What is not clear, however, is how much of this is rhetoric to secure funding from skeptical funders and how much of this is actually believed. In my experience it is largely the former, but the existence of this rhetoric causes misperceptions and portrays a false-image where evidence-based policy is neutral and resting somewhere above politics or ethical considerations.

What is baffling to me is that this vision actually flies in the face of strong evidence produced from social-scientific public policy research, which not only demonstrates that global health is deeply a matter of politics, but also, that it should be.

Bridging the gap will mean finding common ground
In attempting to bridge this gap Ooms suggests that normative researchers should adopt more formal presentation mechanisms in order to relate their findings (similar to those seen by qualitative research).

Relatedly, he also proposes that empirical researchers could also do more to present their theoretical and normative starting points (for example, unveiling an assumption about the right to health). In doing so, Ooms argues that it would be possible to better gage the presuppositions underwriting the research methodology, findings, and policy motivations. It would also, if done properly, allow all researchers to see how most public health research uses a mixture of normative argument and empirical evidence to support their policy claims.

In many ways Ooms’ call for better clarity from both sides should be applauded and promoted. As he says, this could be done through the adoption of presentation standards by all health-related publications. Nonetheless, dialogue could also be promoted through better interdisciplinary collaborations that seek to link these two sides of public health research.

For example, when discussing the content for our book on Global Health Policy, Gavin Yamey (of the evidence-based policy camp), Sarah Wamala (a health policy maker) and myself (a normative theorist and social scientific researcher) consciously decided to commission pieces that presented these forms of research in such a way that they spoke to one another. Our idea from the start was to deliver a more comprehensive book about global health policy that could better capture all of its dimensions and nuance.

Yet, upon reflection the conversations between us three as editors were not easy at first and the language we used to communicate ideas often needed painstaking translation. In the end, we found common ground. However, interdisciplinary translation remains problematic in the attempt to foster the kinds of dialogue Ooms suggests.

In brief response I can only suggest that normative research uses evidence to help come to determinations about what ought to be done all things considered. In addition, as suggested before, empirical research often rests on normative assumptions. The two worlds are not mutually exclusive and are, in fact, mutually inclusive. In other words, it is not simply that one group solely lives in theory and the other on facts.

And lastly, as has been suggested by Ooms, there are good reasons for why we all should continue to try to find more interdisciplinary common ground when it comes to global health research more broadly.