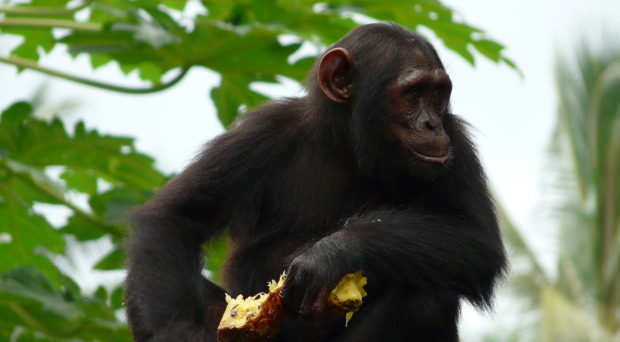 Paul Sesink Clee, Matt Mitchell, and Katy Gonder are from the Gonder Lab at Drexel University, USA. They are the authors of three new articles published in BMC Evolutionary Biology that have revealed new insights into chimpanzees in Cameroon, including their population genetics, evolutionary history and habitat ecology. They conclude that the most endangered chimpanzees may experience drastic habitat loss within five years due to climate change. In this post, they talk about life working in the field, and how their recent findings might help chimpanzee conservation.

Whenever we tell people that we study wild chimpanzees, they always assume that we’re out in the rainforest living with chimps. We wish we could be like Jane Goodall in Gombe, with chimps climbing all over us while we roll around and play with them.

We study the Nigeria-Cameroon Chimpanzee (Pan troglodytes ellioti) which is the most endangered of all chimpanzee subspecies in the world, with only 3,500 – 9,000 individuals remaining in the wild. As many of these chimps are already under threat of hunting, they are more likely to run away from us than let us spend time with them.

Even though it is amazing to be able to watch quietly while there are over a dozen chimps in a tree hooting and hollering, that’s not really what our work is about. Our lab is one of the few groups studying Nigeria-Cameroon chimpanzees in the wild, and unlike behavioral studies, we use non-invasive sampling techniques that don’t require close contact with the chimps.

Long-term field sites, like the Ebo Forest Research Project, have permanently manned research camps where they base their operations of wildlife surveys and conservation efforts.  Our work is much different. Instead of setting up permanent research camps to get close to the chimps, we go to the forest, hike in with all of our gear and food, build a temporary camp, and spend the next week or so looking for and tracking groups of chimps so that we can collect their hair and feces for genetic analyses, and then hike back out.

Cameroon is an important focus of our research, as it is the only country where the ranges of two chimpanzee subspecies converge.  This makes it a ‘natural laboratory’ for studying the factors that create and maintain genetic diversity among populations.

This latest work started out as a population genetics study designed to understand what biogeographic barriers were separating the Nigeria-Cameroon chimpanzees from their neighbors to the south, the Central African chimpanzees.  Our findings, however, suggest that the story is much more complex.

In our first paper in the current issue of BMC Evolutionary Biology, we reveal how chimpanzees in Cameroon have likely speciated as a result of natural selection, and not simply due to geographic isolation across the Sanaga River as previously thought.  We also found evidence of an additional distinct gene pool of Nigeria-Cameroon chimpanzees in the savanna-woodland mosaic of central Cameroon.

This savanna-woodland habitat is very different to the wet rainforest habitats that other chimpanzees occupy in western and southern Cameroon.  Could this mean that chimpanzees in Cameroon and Nigeria are adapted to their habitats and that is what has been driving their speciation?

We took a closer look at this alternative hypothesis in our second paper.  If chimpanzees really were adapted to their habitats, we would expect that each population would occupy divergent niches within an ecosystem.  By collecting environmental data from satellite imagery, we modeled the suitable habitat of each population of chimpanzees, and saw that this was indeed the case.

And in our third study we showed that habitat variation is much more important in shaping genetic diversity in Nigeria-Cameroon chimpanzees living in both the rainforest and the savanna-woodland mosaic, than it is for Central African chimpanzees.

The Nigeria-Cameroon chimpanzees living in the savanna-woodland mosaic habitat in central Cameroon are under the most immediate threat of climate change, and may completely lose their habitat within our lifetime.

If environmental variation and differences in habitat have shaped these populations over time, then how might climate change alter their suitable habitat in the future?  After projecting models for each chimpanzee population onto climate scenarios through to the end of this century, we determined that their habitat would likely deteriorate in the near future.

Most importantly, the Nigeria-Cameroon chimpanzees living in the savanna-woodland mosaic habitat in central Cameroon are under the most immediate threat of climate change, and may completely lose their habitat within our lifetime.

These findings are very important to consider in the conservation of the Nigeria-Cameroon chimpanzee.  West-Central Africa is currently undergoing incredibly rapid economic growth, and chimpanzees in this region are already under constant threat from habitat loss from industrialized agriculture, illegal hunting, and wildlife trafficking.  Comprehensive and proactive conservation planning is therefore key to ensuring their survival.

Lions in the jungle?

In our time spent in Cameroon, in addition to chimps, we’ve seen gorillas, forest elephants, forest antelopes, monitor lizards, tons of monkeys, and many more animals up close.

But people always ask us: “Are there lions?  Do you carry guns?” Luckily for us, we don’t have to worry about lions and don’t carry guns, but we’ve had some other scary close encounters with wildlife before.

One of our first trips into the field was at Mbam et Djerem National Park in Cameroon and the site that we were travelling to was only accessible by boat.  We were about halfway down the Djerem River when we were chased and almost attacked by a huge male hippo.  We clearly remember the guys that were paddling the canoes yelling, “He’s hunting us!” The hippo jumped so high out of the water we could see his feet.

However, contrary to how it may sound, much of our time in Cameroon isn’t occupied with fieldwork.  We are also actively involved in developing conservation strategies with the Cameroonian government, academic workshops that bring together American and Cameroonian students, and diplomacy work with the U.S. embassy in Yaoundé.

Along with the University of California, Los Angeles and the University of New Orleans we are also one of the founding members of the Central African Biodiversity Alliance (CABAlliance), which is an international partnership involved in conservation and education efforts across central Africa.

A key element of our work is therefore ensuring that the information we gather while in the field, just like this recently published research, will actually be put to use and help bolster chimpanzee conservation efforts.

Paul is a Ph.D. candidate at Drexel University in Philadelphia, PA, USA studying disease ecology and climate change in wildlife across equatorial Africa. He earned his Master’s degree in Ecology and Evolutionary Biology at the University at Albany – State University of New York studying chimpanzee population ecology in 2013.