From Aedes aegypti and axolotls to Xenopus and zebrafish, BMC Developmental Biology has had a busy 2014 and below we round up a selection of our highlights of the year.

One of our most cited and viewed articles of 2014 was also one of our first with Philippos Mourikis andShahragim Tajbakhsh’s review of Notch signalling in skeletal muscle stem cells. In February Joan T Richtsmeier and colleagues looked at the role of FGR2 in craniofacial development. The study was discussed in neuroscience news and Biome, our online magazine, featured an interview with the author. 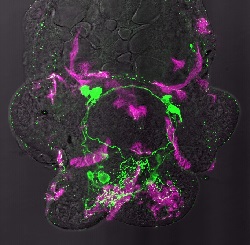 We moved onto March with this image highlight fromEvgeni G Ponimaskin and colleagues, taken from their study into the mechanisms of the freshwater snail (Helisoma trivolvis) larvae development. April boughtanother highly accessed article in this proteomic and transcriptomic study of the developing yellow fever mosquito (Aedes aegypti) eggshell by Anthony A Jamesand colleagues. 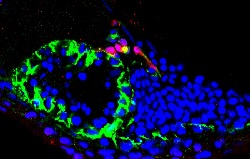 Finally we ended the year with a wealth of research including articles from Phillip A Newmark on antibodies for planarian studies and Takashi Adachi-Yamada onDrosophila male accessory gland development.

Philippa is an Editor for the BMC-Series. Before joining BioMed Central in 2010, she did a PhD at the National Institute of Medical Research, UK and a post-doc at the Albert Einstein College of Medicine, USA.