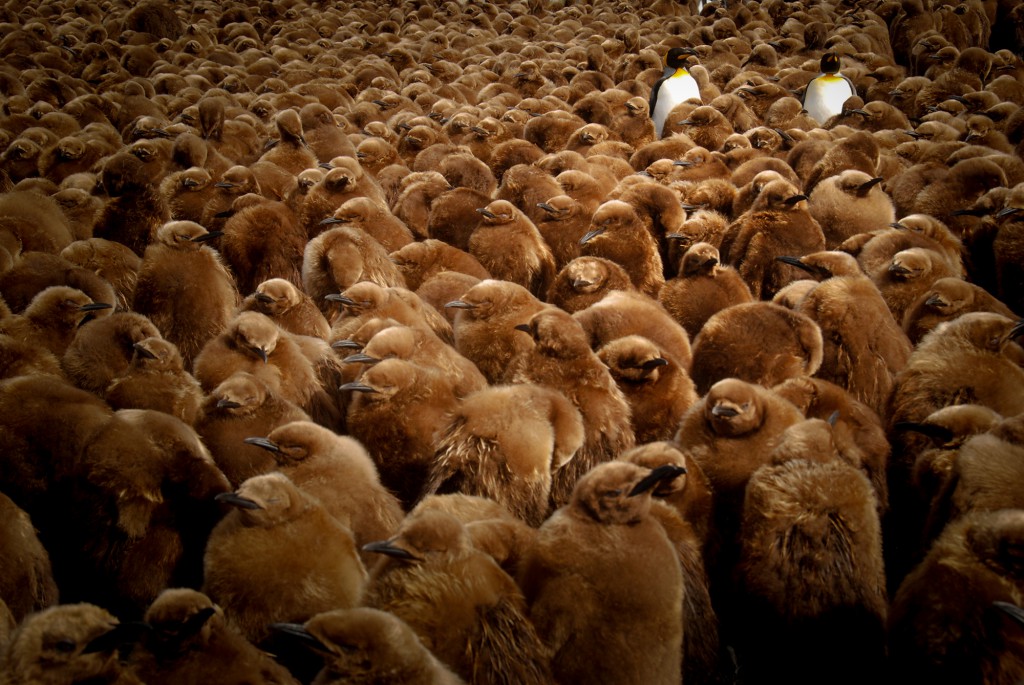 Laetitia Kernaleguen is an ecologist with an interest in animal behaviour. Although currently working on a PhD studying the reproductive success in fur seals at Deakin University in Australia, this Q&A takes us back to her research on king penguins, at a time when she was collecting some data and samples to send back to the lab.

Tell us a bit more about this image?

This image shows two adult king penguins (Aptenodytes patagonicus) in the middle of a huge crèche of chicks. It illustrates one of the most fascinating interactions between animals: cooperation. Cooperation happens more frequently than we think. Here, penguins huddle together in huge crèches of several thousand chicks to protect themselves against the cold and predators.

We loved the sense of humour in this photo, and the juxtaposition of the adults and chicks. Why were the adults amongst the chicks rather than out foraging?

Winter on Crozet Island means dwindling prey populations around the colony, so most adults have to travel to Antarctica to forage. When they return to the colony, they usually stand next to the crèches and sing. Chicks hurtle towards them, frantically singing, desperate to be recognized. It’s a distressing moment, as there are many cheeky chicks trying to weasel food from any adult. You can sense a chick’s fear of not getting fed and its relief once it is reunited with its parents. The photo shows a time when two adults entered into this big crèche to find their respective chick and feed it.

The individuality of each of the birds in the image is really engaging. Did you get a chance to bond with the birds when you were taking this photo?

I found that a huge crèche like the one in the picture is rather impersonal; it looks like a noisy and smelly uniform entity. I followed this colony for 15 months, measuring chick’s growth rate from their birth until their first trip at sea, at about ten months old. I was amazed by the birds’ strong personality. Some were excessively curious; some were always fighting against me, hitting me again and again; while others were very cooperative with my research work. One was even clever enough to recognize me and hide every fortnight I was supposed to catch it. Funnily enough the chick never did so on the other days and I never did find the hiding spot.

Where were you when you took this picture? Why were you there and was anyone else with you?

I took this picture at Crozet Island, located in Sub Antarctica. I was working for a French research lab, the DEPE-CNRS in Strasbourg, collecting some data on king penguins. No-one lives permanently on the island. During the austral summer, we were about 40 people, a mixture of researchers and technical staff. In winter, we were only 22. The island is only accessible by boat that comes four times per year. I had the chance to live 15 months in this remote island, it was an amazing personal and professional adventure.

What about the scene do you find particularly interesting?

I like how hundreds of weak individuals gather together to form one strong entity. During winter chicks are hardly fed and many of them die from starvation. They are an easy target for their main predator: giant petrels. By huddling together they form one big mass where it is difficult to distinguish the weaker ones.

Photography is an amazing way to share with many people our live experiences. Without any words, pictures can deliver a message, a situation and even feelings. The BMC Ecology Image Competition invited me to unite my two passions: ecology and photography. I am very honoured to receive a prize from this competition!