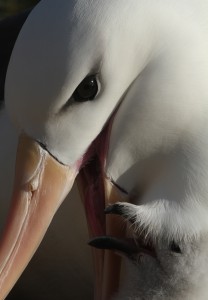 Parental care is at the heart of this wonderful portrait of an adult black-browed albatross feeding its chick, photographed by Italian born researcher Letizia Campioni, a biologist specializing in the migratory ecology in birds. Spending many hours in the field, Letizia had the chance to combine her love for photography with her research, using her skill as a means to share her observations with others and this year’s runner up in the BMC Ecology image competition. Exploring isolated islands and inaccessible regions, she shares her intimate encounters with nature.

Where were you when you took this picture?

I was on New Island in the far South-western Atlantic, with my research team, to monitor a large colony of black-browed albatross. Every day we visited the colony. After fieldwork, I used to spend a few hours walking around the colony observing the elegant flight of albatross, the sweet ritual displayed among partners and the affection they had for their chicks. My faithful friend during those two and a half months was my CANON EOS 7D.

Your photo expresses a really touching relationship between a parent and its chick – were you very close when you took this and did you get to observe them for a while?

The picture was taken using a telephoto zoom far from the birds to not disturb them. I wanted to capture the albatross’s natural relationship.

Your photograph captures a lot of detail in the birds’ feathers and beak – was that technically very challenging, and how did you capture it?

The most challenging part was the great dose of patience and time needed to take the photograph and also the ability and knowledge of the ethology of the species to predict where and when the animal was going to appear or to display a behaviour. Finally, my perseverance was rewarded with a nice photograph where few, but relevant, details are able to describe how carefully parents take care of their only chick, on which they invest energy and time for approximately 6 months a year.

I decided to send this picture because it really touched me when I saw it at home and I am really happy now that it won the prize. It means that the message of this picture is touching for other people too.