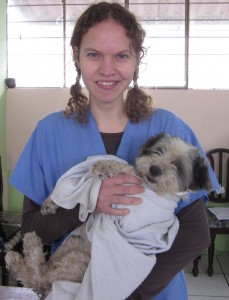 Research published today in BMC Veterinary Research could assist veterinarians and policy-makers in the future. In this guest post, Andrea Strakova describes the history and distribution of canine cancer, an infectious disease that not only infects ‘man’s best friend’ but threatens the existence of the Tasmanian devil. In ‘Fighting a contagious cancer’, fellow researcher, Elizabeth Murchison, speaks about the fight to save the Taz.

Canine Transmissible Venereal Tumor (CTVT) is a canine infectious disease that results in the appearance of tumors, usually associated with the external genitalia, in both male and female dogs. It is one of only two known naturally occurring clonally transmissible cancers, which are spread by the transfer of living cancer cells between individuals. CTVT is usually spread during mating, possibly facilitated by injuries incurred during coitus.

CTVT originally arose as a cancer in one dog that lived approximately 11,000 years ago and has since survived as a clonal lineage by transmitting through the dog population as an infectious disease. It is striking that since the emergence of this cancer in a single dog, its cells have efficiently colonized dog populations throughout the world. Although previous studies had indicated the broad distribution of CTVT, our current study has provided the most comprehensive information so far regarding the distribution of the disease.

To investigate the current global distribution of the disease, we performed a crowdsourcing study by soliciting CTVT information from veterinarians around the world. The responses to this survey, received from 645 individuals in 109 countries, indicated that CTVT is endemic in at least 90 countries worldwide. The extraordinary efficiency of CTVT’s global spread was highlighted by its presence in some of the world’s most isolated communities and islands, including the Solomon Islands, Samoa, American Samoa, Fiji, Reunion, Mauritius, several islands in Micronesia, remote parts of Siberia, Indian reservations in Arizona and North Dakota and Aboriginal communities in Northern Australia.

Furthermore, our study also revealed that although CTVT has spread worldwide, its prevalence rarely appears to rise above 10% in affected dog populations, suggesting that only a proportion of dogs may be susceptible to CTVT infection at any one time. This contrasts with the epidemiological patterns observed in the only other known naturally occurring contagious cancer, the transmissible facial tumor affecting Tasmanian devils, in which the disease prevalence usually rises above 50% and causes population collapse.

The information on worldwide distribution and prevalence of CTVT provided as a result of our survey is of importance to veterinarians and dog owners in many countries worldwide, as although CTVT can usually be effectively treated, lack of awareness of the disease and poor access to veterinary care can cause CTVT to become a welfare concern. 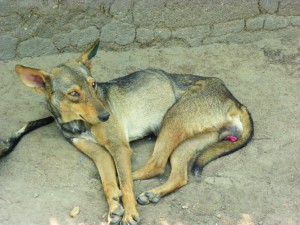 Additionally, our study has implicated free-roaming dogs as a reservoir for the disease and has shown that the disease was eradicated in the UK during the twentieth century as an unintentional result of the introduction of dog control policies. We also found that dog spaying and neutering are associated with lower CTVT prevalence, further highlighting the possible health benefits of dog sterilization.

Our results add to the existing body of evidence which suggests that careful management of free-roaming dog populations, as well as the inclusion of CTVT in dog import/export quarantine policies, may help to control CTVT spread.

In the future, further studies into the pathogenesis and spread of CTVT may lead to improved methods for disease prevention, detection, monitoring and treatment. In addition, greater understanding of the adaptations that have allowed this unique long-lived cancer to efficiently colonize the world’s dog population, may shed light on the evolutionary processes underpinning cancer more generally.