The origins of Thylacocephalans, bizarre arthropods extinct for over 80 million years, has long been shrouded in mystery. The discovery of a new species, the oldest yet found, is described today in BMC Evolutionary Biology, giving us new insight into the evolution and lifestyle of this remarkable predator.

The fossil record contains many bizarre types of animals unlike any species alive today. Thylacocephalans are an excellent example of such a group. Extinct for over 84 million years, they are assumed to be related to crustaceans. However their bizarre morphology, so unlike any modern crustaceans, means their exact relationship to existing animals remains controversial.

Research published today in BMC Evolutionary Biology, sheds new light on these enigmatic animals. New fossil specimens from the Jurassic era provide new information on previously known species from this period, while a newly discovered species, the oldest yet found, extends the known existence of this group back to the Silurian period – 435 million years ago.

These new fossils tell us more about the development of the Thylacocephala over time, their predatory lifestyle, and their relationships with modern day crustaceans.

Back to the Jurassic 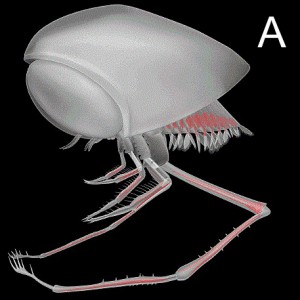 Image A shows an artistic reconstruction of the general bodyplan of the Thylacocephalan species Clausocaris lithographica. This species, which would have been found in the oceans of the Jurassic period, approximately 150 million years ago, demonstrates many of the features characteristic of the Thylacocephala.

A large shield-like carapace covers most of the body, with the trunk of the body itself visible at the rear. The long raptorial appendages stretching out from beneath this carapace would have been used for capturing prey.

These features have led to a consensus that these animals were either mobile predators, swimming swiftly through the sea in search of their prey, or ambush predators, lurking in cover with those long claws ready to grab their unsuspecting quarry. 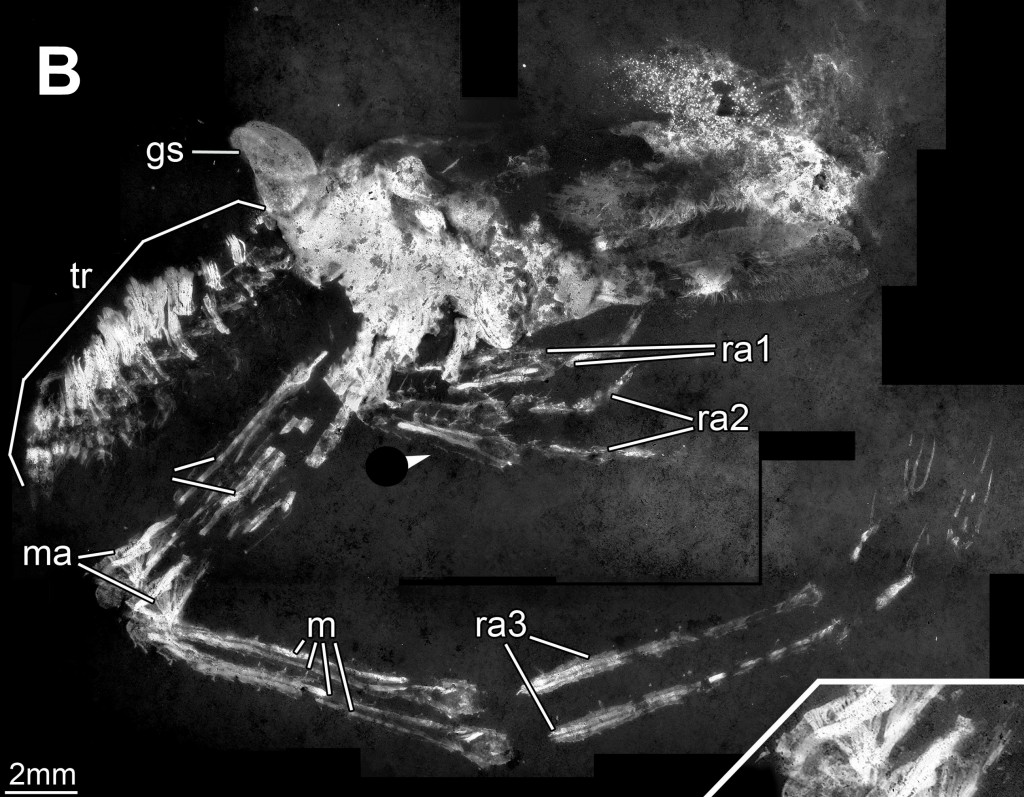 Image B shows one of the newly discovered Clausocaris lithographica fossils, found in Solnhofen, Southern Germany. While this species has been previously described, these new fossils allow further insight into the species.

The fossil shows the animal in roughly the same orientation as the artistic reconstruction, with the shield covering the front half of the body on the right side and the animals trunk sticking out at the rear (marked tr). The fossil has preserved the substantial striated muscles controlling the appendages (marked ma) to a quite remarkable extent; the degree of these muscles supports the idea of the appendages use in catching prey. This fossil also provides a glimpse of presumed gill structures (marked gs). 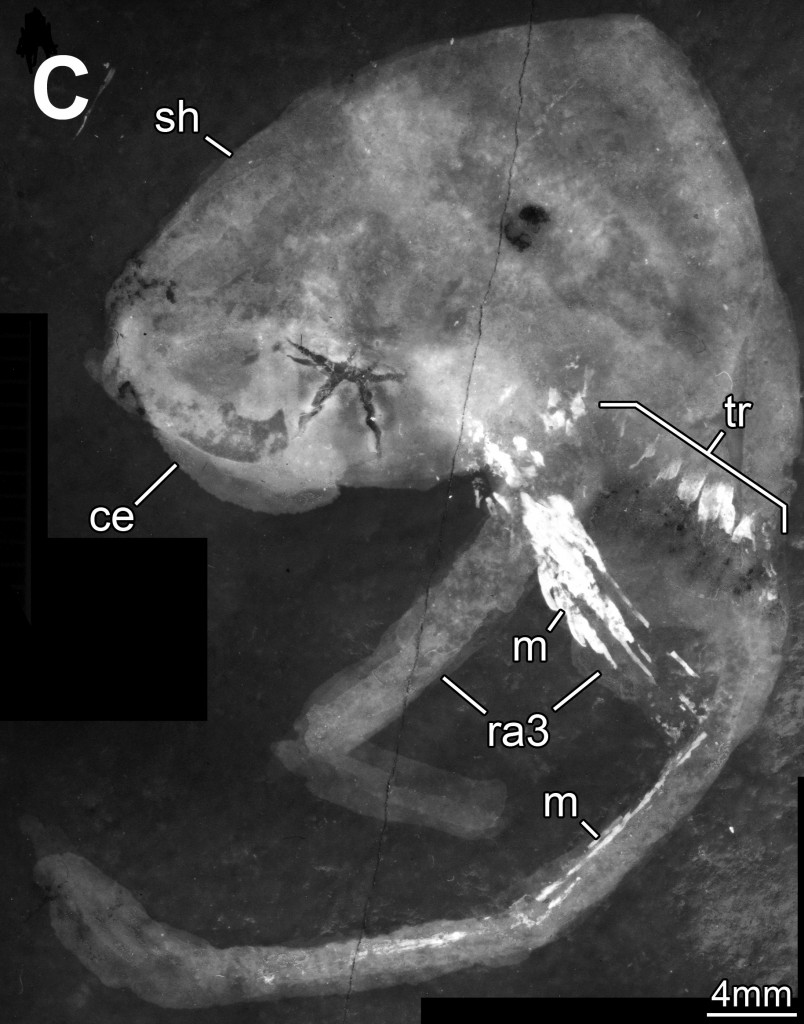 The fossil in image C preserves a frontal view of Clausocaris lithographica and also provides a good view of its large compound eyes (marked ce).

The Silurian species – old and primitive

The new species described in the paper has been named Thylacares brandonensis, after the Brandon Bridge Formation in Wisconsin, USA where the fossils were found. It is the oldest know Thylacocephalan, dating from 435 million years ago in the Silurian period. 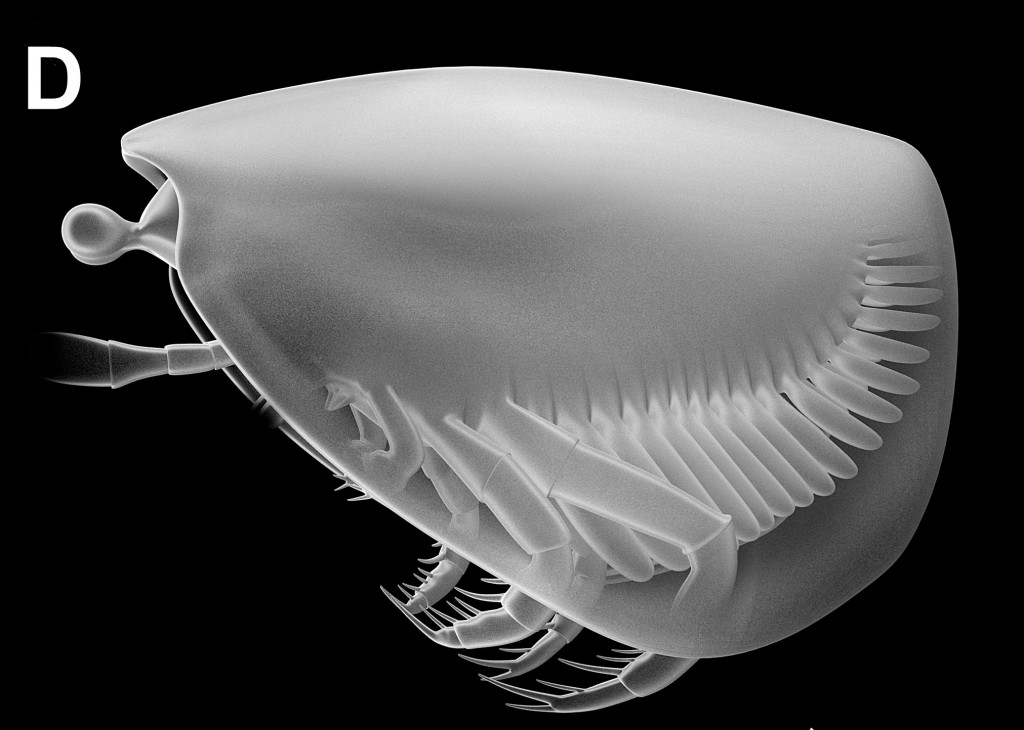 Image D shows an artistic reconstruction of the general bodyplan of Thylacares brandonensis. Many of the key characteristics of the Thylacocephala can still be seen, especially the large shield covering the body. However, the new species also presents a number of unusual features. Its eyes (the bulb like structure at the front) are small and apparently stalked; quite distinct from the large immobile compound eyes of other Thylacocephalan species. The characteristic appendages are present and similar in structure, but, as can clearly be seen, are much smaller than those in the Jurassic species

Image E shows one of the actual fossils from which the new species was described (colour added by the researchers). The two stalked eyes can be seen at the front (marked ce) and you can clearly see how much shorter the appendages (marked ra) are compared to the Jurassic species. The different segments of the trunk (marked ts) are clearly preserved as is, remarkably, the gut of the animal (the yellow stripe going through the middle, marked gs). Another key difference to the Jurassic species is the apparent lack of gills, although it’s possible they have just not been preserved in these fossils. 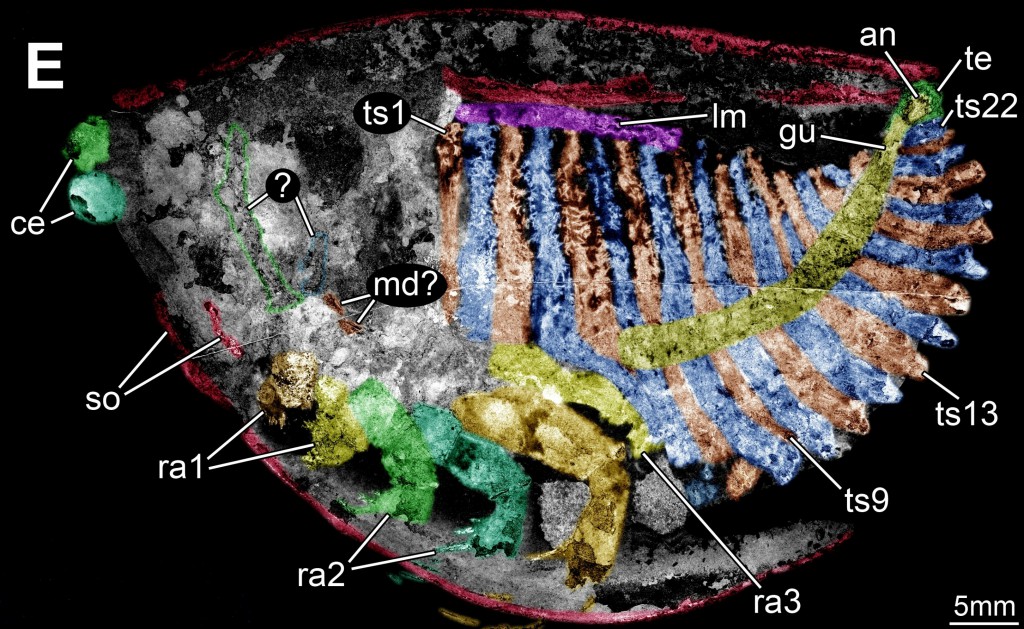 In general, the Silurian species appears to be a more primitive version of the later Jurassic species. The large bulbous eyes and extremely elongated appendages of the Jurassic species seem to have evolved at some point between the Silurian and Jurassic periods. It appears then, that Thylacocephalan morphology only became more extreme as time went on.

So just what are these things?

The structure of the appendages in these new fossils, especially the numerous bristle like structures at the end of them, does match that seen in many crustaceans, further supporting this proposed relationship. More specifically, the researchers suggest that the structure of the appendages and associated muscles supports the idea of Thylacocephalans being a sister group of Remipedia, a group of small, blind crustaceans (looking rather like swimming millipedes) still found today in salt water filled caves around the world.

While this new evidence moves us further forward in our knowledge of these enigmatic creatures, doubtless there will continue to be controversy over the exact designation of the Thylacocephalans. Undoubtedly though, these remarkable new fossils serve to remind us of the bizarre wonders that once existed in the oceans of ancient times.