There are many things we might think of when admiring the song birds we see in our gardens and woodlands; their bright plumage, the beautiful singing, the chicks waiting back in the nest. Cunning and duplicitous mind games between birds engaged in a battle of wits? Not so much. Yet research coming out of Finland suggests that common garden birds are capable of just such complex, almost Machiavellian, behaviour. 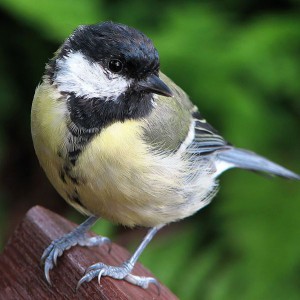 Great tits (Parus major) are a common garden bird found throughout Europe (and a relative of chickadees in America). During the breeding season, the number of eggs laid by females varies considerably, from as few as 5 up to as many as 18. Evolutionary theory tells us females should always lay as many eggs as possible and so, as with many birds, biologists consider the number of eggs a female lays to be a measure of her quality. Indeed previous research conducted in Oxford has shown that female great tits laying larger clutches have superior problem solving abilities and exploit their environment more efficiently.

Pied flycatchers (Ficedula hypoleuca) are well aware of these facts. Another common songbird, during the breeding season they migrate to areas where great tits are resident year round. Female pied flycatchers are regularly seen visiting great tit nests during the early part of the breeding season. The reason? They are counting eggs. Jukka Forsman and his group at the University of Oulu in Finland have been studying the interactions between these two species for a number of years. Their previous research has shown that flycatchers are capable of counting the number of eggs laid in great tit nests and from this judging the quality of the female who laid them. If they are impressed by the number of eggs, they are more likely to nest in this area themselves; after all, if such an intelligent and discerning great tit has chosen to nest here it must be a good spot for a pied flycatcher to nest as well.

How to solve a pied problem

These are smart tactics for the pied flycatcher, but they present a problem for the great tit. While flycatchers have been found to raise more chicks when nesting near great tits, the reverse is not true; the two species compete for the same food sources and the presence of flycatchers results in great tits producing fewer nestlings in poorer condition. As such, great tits laying large clutches have a strong motivation to hide this information from local flycatchers.

One way they may do this is by hiding their eggs. As a group, tits and chickadees are unusual among birds in covering their eggs with nest material. This is a costly behaviour for great tits –  considerable time is spent gathering material – and so one would expect a strong reason behind it. Insulating their eggs from the cold is likely to be one reason; however, tits only cover their eggs during the laying period, and not later when the incubating parent leaves the nest to forage. Besides, why would great tit eggs be so much more vulnerable to the cold then the eggs of other birds (like pied flycatchers) that leave their eggs uncovered? Instead, suggest Forsman and colleagues, might great tits be covering their eggs to shield them from the prying eyes of passing pied flycatchers? It was to test this hypothesis that they conducted new experiments, the results of which are published today in BMC Evolutionary Biology. 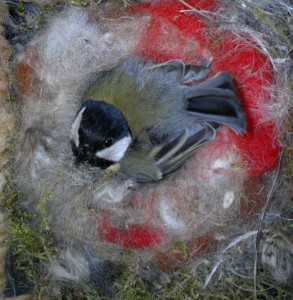 Draw the curtains so the neighbours can’t look in

The experiments used 61 great tit nests located in two regions of Finland. First, the researchers measured the extent to which eggs were covered by nest material. They then removed all this material, leaving the eggs uncovered. A bag of sheep hair was left underneath the nest to ensure the great tits could re-cover their eggs as much as they desired. The twist was that the authors also left a model bird near the nest; past research has shown that great tits will react to these models as they would to a real bird. The experiment was conducted twice at each great tit nest; once using a model of a pied flycatcher, once with a model waxwing (a common bird in these areas, but one that does not compete with great tits for food or nesting sites); a recording of the corresponding birdsong was also played.

As the researchers predicted, great tits brought more hair back into their nest and covered their eggs more carefully when in the presence of the fake pied flycatcher compared to the model waxwing. These results strongly support the hypothesis that one reason for great tits covering their eggs is to prevent pied flycatchers from acting as ‘information parasites’; by covering their eggs when flycatchers are present, they seek to discourage them from becoming their neighbours.

Here then is an evolutionary arms race between the two species. Flycatchers act as information parasites, exploiting great tits knowledge of good nesting sites and hurting them in the process. The tits strike back by hiding this information from the flycatchers. Is there scope for further escalation? Perhaps; anecdotal reports exist of flycatchers removing nest material from great tit nests and the tits later returning it. One thing is clear though; those birds we are admiring in our garden have the potential to be a lot more cunning and mendacious then we previously thought. 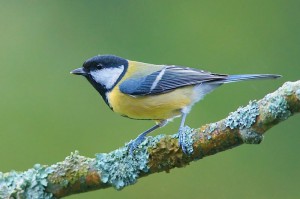 Additional note: A short note on a potentially big change to how peer review works. This study is the first paper published by BMC Evolutionary Biology to have come to us from Peerage of Science. Peer review was conducted by two ‘peers’ and the authors were offered publication in BMC Evolutionary Biology based on these reviews and the authors response to them. More on this novel system of peer review can be found in this interview in Biome with Janne-Tuomas Seppänen, one of the founders of Peerage of Science. Dr Seppänen is also one of the authors of this paper; we should note that part of the Peerage of Science system is that author names remain anonymous to external editors until after a publication offer is made.