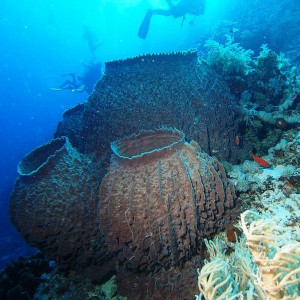 Despite lacking nerves, muscles and a central nervous system, sponges (Porifera) are capable of organizing behaviours in response to external stimuli. One such interesting response among the demosponges (the largest class in the phylum Porifera, comprising 90% of all sponges) is an inflation/contraction response, or “sneeze”, as a coordinated response to stimuli. This combination of simplicity of form and sophisticated reactive responses prompted a group of researchers, led by Sally Leys of the University of Alberta, to investigate the means of sensory function in these ancient Metazoans; beginning with the discovery of cilia on all cells forming the epithelial lining of the osculum in the freshwater sponge Ephydatia muelleri in a study recently published in BMC Evolutionary Biology.

Cilia are slender, hair like structures that project from a larger cell body. There are two types, motile which beat in co-ordinated waves and non-motile (or primary) cells which serve a sensory role in eukaryotes.  The osculum, a prominent feature of sponges, is a chimney-like structure through which water exits the sponge. This study presents experimental evidence incorporating a variety of research techniques, which point towards a sensory role for the cilia of the osculum in E. muelleri and other sponges. The cilia are shown to be localized, non-motile and orientated perpendicular to water flow. They are thus well positioned to sense flow rate and respond to an accumulation of particles by controlling the canal diameter of the osculum to optimize regular flow, thereby stimulating the sneeze behaviour shown here. Ablation and pharmacological experiments performed using chemicals commonly used to inhibit the sensory abilities of primary cilia in other organisms, revealed the sponges cilia to be similarly affected, inhibiting the sneeze and lending further support to their role in sensing stimuli and transducing them into behaviour.

The results of this study may well have larger implications beyond an understanding of the mechanisms underlying the sneeze response in sponges. The sponges are extant representatives of an ancient lineage and widely considered as basal among the Metazoa.  The sensory role of the cilia in the osculum may represent either a convergent role across all Metazoa, or an ancient evolutionary role for primary cilia in transducing sensory information in early multicellular animals. These findings of an organized array of sensory cells in sponges could represent a living example of the first sensory behaviours to have evolved in animals and may provide the key to understanding the possible mechanisms of evolution of sensory systems in the Metazoa.