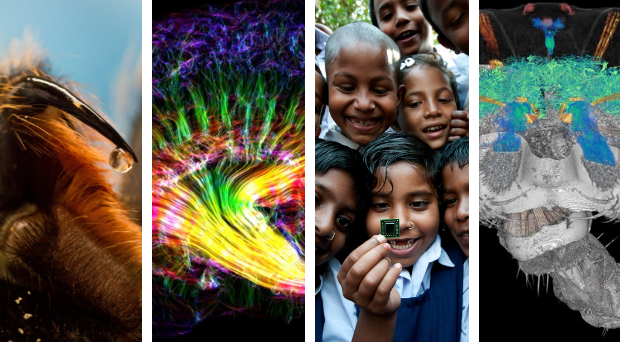 Earlier in the year we launched the second annual BMC ‘Research in progress’ competition, following the success of the inaugural competition in 2017, in which we received a host of amazing images.

Once again, we asked you to send us photographs reflecting innovation, curiosity, integrity and most of all, your enthusiasm for science and progress.

Here we present the winning image, the runner up and a selection of entries that caught the eyes of our judging panel.

The winning image of a mouse kidney has been obtained by diffusion tensor imaging, an MRI-based imaging technique. The bright neon colors represent the orientation of different tubules, which collect filtrate from blood passing through the kidney and process it into urine.

Speaking to us about his winning entry, Nian said: “It’s my great honor to receive this award. The image shows the complex 3D tubular structures of a mouse kidney. It was taken at the Center for In Vivo Microscopy (Directed by Prof. G. Allan Johnson), where our research focuses on developing novel MRI methods to detect tissue microstructures. The non-destructive nature of MRI and its ability to assess the renal microstructure in 3D make it a promising tool to understand the complex structures of the renal system.”

The runner up – submitted by An-Lun Chin, at the Brain Research Center, National Tsing Hua University, Taiwan – is a high-resolution 3D reconstruction of a Drosophila head, showing the nervous system, muscles, cuticles, and visual sensory system. Drosophila melanogaster is a species of fly, known generally as the common fruit fly. It is widely used for biological research.

We want to say a huge congratulations to our winner and runner up, Nian and An-Lun, and a massive thank you to all those who entered. Our judges were astounded by both the volume and quality of the submissions.

All images have been released under a Creative Commons Attribution 4.0 License, so everyone is welcome and encouraged to share them freely, while attributing the image author.

Below you can see some of the highly commended images and those deserving special mention.

School children from a remote village of Suderbans Island gaze at a microchip during their visit to a national research institute in the city of Kolkata, India.

A Madlebrot Fractal fed to a deep dream algortithm that was trained on autoportraits of the author resulting in this hallucination of fractal eyes. The photo is generated by Artificial Intelligence, research and patience.

A farther Dyeing Poison Frog (Dendrobates tinctorius) carrying a tadpole while wearing a tracking device. Poison frogs are small inhabitants of the South American rainforests. They are well known for their flashy anti-predator warning colors and their parental behavior. In many species, males shuttle tadpoles from land to small pools of water piggy-back style on their backs. Even such colorful animals can be extremely hard to observe and follow in their natural rainforest habitat.

We deployed miniature radio-transmitters to study the behavior and movement patterns of these small frogs (only 4 centimeters long). In this photograph, a male Dyeing Poison Frog is carrying his single tadpole (the black mass on his back) while wearing a color-matched radio-transmitter allowing to track his movements. Photographed during a study in the Nouragues Nature Reserve, French Guiana.

During plant in vitro propagation, it is quite common to have contaminations by molds, yeasts or bacteria from the environment: sometimes their growth causes the formation of fluffly and colored structures. In this case the contamination surrounding a small grapevine plant looks like some kind of cake.

A group of crane flies in the Southern Philippines create a stunning natural display that is a male aggregation called ‘Lekking’. This behavior can be seen in many species and though it is believed to help improve reproduction, studies are still ongoing as to how these insects do this and how it evolved into what it is now. This particular species of crane flies are in danger of losing their natural habitat in the forest due to climate change and their absence is affecting the balance of our ecosystem. Researchers and conservationists are currently figuring out how to save them from disappearing.

This is a picture of a cochlea I dissected and labelled by immunohistochemistry. After that the cochlea was clarified and the picture was taken with a Light-sheet microscope. The inner ear shelters the cochlea, a spiral of cells whose role is to capture the air vibration through the hair cells (labelled in red). These unique cells convert sounds into electrical signals that are relayed to the brain via the neuronal fibers (labelled in green). All the other cell nuclei are labelled in blue. I consider myself lucky to be able to work on such a beautiful and complex structure, which has yet to be fully understood.

I live on a farm and I work with plants. Part of the farm has a small Andean forest that borders a hydrangea crop. On the edge of the forest I found a “gallina ciega” possibly of the species Caprimulgus sp. This bird is nocturnal. When we found it, we were surprised by its ability to blend into the vegetation, especially on the trunk of a tree. Every day we saw the bird on the same trunk, but only after a while we saw that the bird was with its chick. During the day the mother and the chick remain quiet; it seems that they enter into a state of meditation, which makes it very difficult to see them.

Microorganisms (bacteria, archaea, microeukaryotes) in marine environments secrete a diverse array of exopolymeric substances (EPS) which may be involved in microbial adhesion to solid surfaces and biofilm formation. EPS has also been shown to be involved in emulsification of hydrocarbon oils to enhance biodegradation, mediating the fate and mobility of heavy metals and trace metal nutrients, or interacting with dissolved and/or particulate organic matter. An important role of EPS is in forming marine snow—floating or suspended particles that harbor a community of microorganisms and drive the biological pump.

EPS also plays a key role in marine oil snow (MOS) that forms as a consequence of oil spillage. This image shows the formation of MOS by bacteria that were enriched on the sea surface of the Gulf of Mexico during the Deepwater Horizon oil spill. It shows the MOS particles (blue and white) viewed under the light microscope amongst a sea of oil droplets (brown spheres), of which many were observed embedded within the amorphous matrix of the MOS.

Starfish or Sea Stars are echinoderms that have the ability to regenerate any part of their body. These creatures are excellent model systems to study regeneration, and scientists have found sea star regeneration genes closely related to genes found in homo sapiens. They believe that these unique species contain clues to uncovering potential pathways of regeneration. Additionally, these creatures have developed a powerful foot glue that allows their 15,000 tiny tube feet as seen in the picture to bond indefinitely to any object that they come across. Researchers are currently trying to unravel the proteins that form these adhesives with unique underwater properties.

The image is a collage of photographs of colonic-forming endothelial cells (ECFCs) isolated from peripheral blood of patients undergoing cardiovascular surgery. The photographs were taken on a mobile phone, using a phase contrast optical microscope, 20x objective. The image aims to show how the cells, although they are of the same cell type, vary in morphology; some are more round, others more elongated, some more confluent than others. As these are cells from different people, the image is a microscopic demonstration of how diverse organisms of the same species can be. The objective of this collage is therefore to recognize diversity, as an essential aspect of our existence.