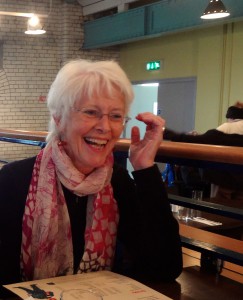 This is a guest post by Professor Rosemary Tannock, Editor-in-Chief of Behavioral and Brain Functions. To mark International Women’s Day, she takes a look back over how her career has developed from physiotherapy to psychopathology.

Two roads diverged in a wood, and I,
I took the one less traveled by,
And that has made all the difference
Robert Frost, 1915

My current career as a behavioral scientist in the field of developmental psychopathology and as an editor for a scientific journal, which I started in my mid-40’s and 60’s respectively, was unanticipated and unplanned when I underwent initial training as a physiotherapist in England.

As I criss-crossed oceans with our young children, following my husband as he pursued his scientific and medical career, I continued in my early-chosen career as a physiotherapist, becoming increasingly frustrated that I had so many questions (why do we use this approach? Is it effective?), but no way of answering them. What I did not understand then, was that I was engaging in scientific inquiry.

Migrating to Canada opened up so many opportunities. Spurred by a requirement to upgrade my diploma in physiotherapy to a degree, I enrolled in university for the first time – with the dubious label of mature-student! Suddenly, I discovered that there were theories, and methods to test those theories, and the opportunity to be creative in developing new methods when old ones failed to yield answers. I continued on into graduate school, passionate about neurodevelopmental disabilities – why did some children have so much difficulty learning to talk, to throw and catch balls, to concentrate, read, write or do arithmetic?

Being both a parent and a student, I learned to be efficient in studying – although assignments often were completed in the late-night hours, while the rest of my family slept! Moreover, I battled a continual worry that my endless studying might have a negative impact on our children*. Somehow, seven years raced past and I found myself with cap and gown – graduating with a doctoral degree in special education, just as our eldest son entered university! However, I then discovered– as is the case for many graduate students today – that academic jobs were virtually non-existent. What could I do with a degree in special education?

Mentorship opened up another opportunity – a path less well-trodden – that of a post-doctoral fellowship. The advertised position was in the Department of Psychiatry, in a pediatric hospital, to investigate the effects of a medication (methylphenidate) on information processing in children with a specific disorder (now known as Attention-Deficit/Hyperactivity Disorder, ADHD). This did not seem an option, since I could neither pronounce the terms nor knew anything about them. However, my mentor gave me this sustainable advice: scientific training is applicable in many contexts. And so, I took the opportunity – albeit seemingly risky – and this turned out to be the starting point of my scientific career, upon which I embarked at age 40+.

The field of neurodevelopmental disabilities has allowed me to use all of my previous experience in physiotherapy, special education and scientific training, and opened up exciting opportunities to learn the theories and tools of neuroscience, such as cognitive psychology, psychopharmacology, behavioral genetics, and neuroimaging. Most importantly for me, this scientific path still allows me to work directly with children and their families – which in part was why I wanted to be a physiotherapist!

Critical and creative scientific thinking is central to the publishing process, by which means scientists disseminate their findings to the broader scientific community. The additional time requirements for this voluntary review process are more than compensated for by opportunity for accelerated learning about different ways of thinking, and about key issues and new methods in scientific fields other than one’s own.

An invitation to join a think-tank on ADHD in Norway, for the 2004-2005 academic year exposed me, unexpectedly, to the excitement of engaging in the start-up and joining the editorial board of a new open-access journal – Behavioral and Brain Functions. Sadly, however, it was the untimely death of its Editor and wonderful colleague – Terje Sagvolden – that opened up the opportunity to step in as co-editor-in-chief, along with another colleague, a basic scientist. And so now, I am starting upon another steep learning-curve: namely the process, politics, perils, and ethics of scientific publishing.

*This worry has now been allayed by the successful careers of our three children, each based on much effort and hard work, passionate commitment and perseverence, and some luck, as did mine;  and by our youngest son’s blog.